Since October last year, Australian jet fighters have been striking ISIL targets in northern Iraq from a base in Dubai. Previously, Australia sent warplanes and military advisers into the Iraq campaign at the request of the US and Iraqi governments.

Australia however, refused to launch air strikes in Syria, although the government does not recognise President Bashar al-Assad’s administration.

Abbott said on Thursday that although “no formal request has been made and no formal decision has been taken,” the matter had been raised.

“While the legality is different, whether these air strikes are taking place in Syria or Iraq, the morality is the same,” Abbott said.

While the opposition Labor Party supports Australian involvement in Iraq, it questioned the legal basis of Australian air strikes in Syria.

The opposition spokeswoman on foreign affairs, Tanya Plibersek, said: “Without a clear legal basis for Australian involvement and without a clear plan – like, what does victory in Syria look like? – I think it would be very dangerous to send Australian personnel into one of the most dangerous places on Earth right now.”

The government can send fighter jets into Syria without seeking the parliament’s permission, although a political squabble could damage public support for any campaign in Syria.

Abbott also said in a press conference: “It’s critically important that Australia and our partners, our Western partners and our Middle East partners, continue to work very strongly to disrupt, degrade and destroy this death cult.” 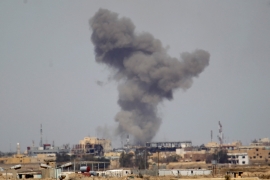