Libya’s internationally recognised prime minister has said in a television interview that he will resign after the station confronted him with questions from angry citizens criticising his cabinet as ineffective.

Abdullah al-Thinni has been based in the eastern city of Tobruk since his government fled Tripoli a year ago after the capital was seized by an armed group that set up a rival administration, part of the chaos gripping the North African country.

“I officially resign and I will submit my resignation to the House of Representatives on Sunday,” Thinni told Libya Channel, a private TV station, referring to the Tobruk-based parliament in an interview broadcast late on Tuesday.

However, Thinni’s spokesperson, Hatem al-Araibi, denied afterwards that the prime minister had resigned.

Thinni has faced criticism for running an ineffective rump state in the east since losing Tripoli, where the rival administration, which is not recognised by world powers, now control ministries and key state bodies, four years after the overthrow of longtime ruler Muammar Gaddafi.

His cabinet, working out of hotels, had struggled to make an impact in the remote eastern city of Bayda, while citizens complained about chaos, shortages of fuel and hospital drugs as well as a worsening security situation.

During the TV interview, Thinni became angry when the host presented him with questions he said he had collected from viewers who criticised Thinni for a lack of security and aid for people displaced by Libya’s chaos.

Q&A: The two sides of Libya – Khalifa al-Ghwell – leader of rival government based in Tripoli

When the presenter asked Thinni what he would do if there were protests, he said: “People do not need to protest against me because I officially resign from my position.”

Thinni’s government had originally planned to set up parliament in the main eastern city of Benghazi but relocated to Tobruk near the Egyptian border after Benghazi turned into a battleground between the government and armed groups.

The House of Representatives initially opened in a Tobruk hotel but moved to a naval base after a suicide bomber detonated a car in front of the hotel in December last year.

The House is being challenged by the legally installed government in Tripoli, known as the General National Congress (GNC), that was set up after Thinni’s rivals seized the city in August last year.

The GNC had been the country’s previous assembly whose mandate had ended with the election of the House of Representatives but was reinstated by the new Tripoli rulers.

Armed groups have exploited a security vacuum as the two rival governments fight each other on several fronts without either side gaining the upper hand. 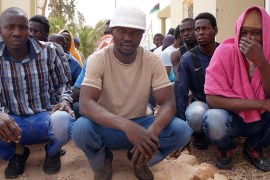 For many migrants, the ocean is the last leg of their trip to Europe, a harrowing journey across treacherous borders.