The UN has pledged $9m in aid to step up the response to devastating flooding in Myanmar.

Nearly 90 people have died and four states have been declared disaster zones affecting at least 330,000 residents.

Over a million acres of rice fields have been flooded and crops destroyed on more than 150,000 acres, the agriculture ministry said.

Flood waters are beginning to recede in western Rakhine state, and people are going home to take stock of the damage.

In the village of Than Ta Yar, residents have returned home, and have received rations of rice, cooking oil and bottled water from local organisations.

But residents said they do not know when the next aid package will arrive. 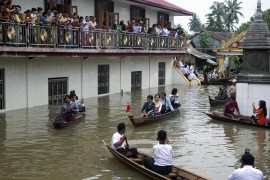 More than 200,000 people have been affected after heavy monsoon rains caused floods in Myanmar. Dozens of people have been killed and thousands of homes destroyed.  President Thein Sein has declared several regions of the country to be disaster zones. 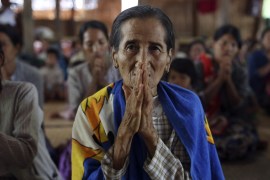 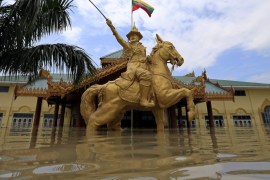 At least 46 dead and more than 200,000 affected after monsoon rains trigger flash floods and landslides.