Turkish prosecutors are seeking prison sentences of up to seven and a half years for 18 journalists they accuse of “engaging in propaganda of a terror group” for publishing photos showing a gunman pointing a gun at an abducted prosecutor in March.

The state-run Anadolu Agency reported late on Tuesday that an indictment prepared by the Istanbul chief prosecutor’s office is demanding prison terms for editors of nine newspapers, including Can Dundar, editor-in-chief of the opposition Cumhuriyet newspaper.

The indictment has yet to be approved by a court.

Mehmet Selim Kiraz, the abducted prosecutor, was investigating the killing of Berkin Elvan, who died in March last year after spending 269 days in a coma due to injuries inflicted by police in the mass protests of early summer 2013.

The hostage-takers, who belonged to the Revolutionary People’s Liberation Party-Front (DHKP/C), an outlawed leftist group, had announced a list of demands for his release, including that the officer who shot Elvan must appear on TV and confess his guilt.

The prosecutor was killed in a failed hostage rescue operation.

The photos in question showed gunmen pointing a gun at the prosecutor. 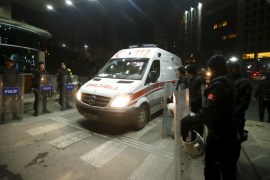 Armed men who took prosecutor hostage at a courthouse shot dead in rescue mission, with captive later dying in hospital.