Pakistan’s Supreme Court has upheld the establishment of controversial new military courts set up to hear “terrorism” cases, rejecting an attempt to have them ruled illegal.

Politcians approved on Wednesday a change to the constitution in January to establish the courts, created as part of a crackdown on anti-government fighters following a Taliban massacre at a school which left more than 150 people, mostly children, dead.

The move prompted concern from human rights activists and in April a group of lawyers challenged the constitutional amendment that created them.

Al Jazeera’s Kamal Hyder, reporting from Islamabad, said that civil rights activists viewed the ruling as a major setback, “but the Pakistani government sees it as a necessity in order to crush this rising wave of terrorism”.

A 17-member bench of the Supreme Court dismissed the petition by 11 votes to six, Chief Justice Justice Nasir-ul-Mulk said in a brief ruling, before a detailed judgement expected later.

Kamran Murtaza, a former president of the Supreme Court Bar Association and a petitioner in the case, told AFP news agency they would consider asking the court to review its decision.

“We stated in our petitions that the matter of military courts is not in accordance with the constitution and it is against human rights,” Murtaza said.

“It affects the basic structure and independence of judiciary itself.”

Parliament has approved the use of the courts for the coming two years, and cases are referred to them by provincial governments.

But some have called for the trials to be more transparent. The International Commission of Jurists on Wednesday condemned the military courts as “secret, opaque” and in violation of fair trial obligations.

The army announced the first verdicts and sentences from the new courts in April.

Six fighters were sentenced to death and another jailed for life, all on terrorism charges, though scant details of the offences and trials were given.

The Supreme Court had suspended the sentences while it heard the legal challenge. 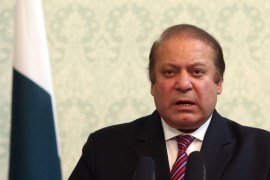