The head of the Taliban’s political office, Syed Tayyeb Agha, has resigned, days after the group announced the appointment of a new chief.

The announcement came amid reports that the Taliban leadership is in disarray following the news of the death of its former leader Mullah Omar.

Agha released a statement that announced his resignation on Monday less than a week after the group announced the appointment of a new Taliban leader, Mullah Akhtar Mansoor after it emerged that Omar died in 2013.

“It was needed that the leader of Islamic Emirate [the Taliban] had to be appointed in the presence of the courageous Mujahideen in their strongholds inside the country [Afghanistan],” Agha said in his statement.

“The appointment of every leader that has taken place outside the country has brought very bad repercussions.”

News of Agha’s resignation has sparked speculation over the unity of the group and its future decisions.

“One of many reasons Tayyeb Agha’s stance is important: it lends weight to rumours of [Mullah] Yaqoob and [Mullah Abdul] Mannan not being happy with Mansoor’s selection,” Mujib Mashaal, an Afghan journalist, said on Twitter.

Born Syed Tayyab Agha Popolzai in Afghanistan’s Kandahar province, Agha had earned the respect of the Taliban leadership because of his closeness to Omar as one of the former leader’s most trusted aides.

Agha was also regarded as the Taliban’s leading negotiator in ongoing peace talks.

He was the Taliban’s most articulate representative, and can speak English and Arabic. He is in his late 30s.

According to sources in Afghanistan, Omar trusted him with highly sensitive information and Agha acted as his English-language interpreter and envoy before the US invasion in 2001.

Following reports of rifts within the leadership, Mansoor released his first audio message on Saturday calling for unity and urging the Taliban to “ignore” the peace talks.

“We will continue our jihad and will fight until we bring an Islamic rule in the country,” he said in the audio message.

“We should not pay attention to propaganda against us including peace talks.”

Agha, in his resignation statement, confirmed that he would no longer be a part of the meetings with internal and foreign entities.

“I am not meeting with any internal or foreign entity nor will I speak to the media outlets on behalf of and as a representative or official of Islamic Emirate, the Taliban movement and the political office or commission,” Agha said.

The Taliban opened a political office in Qatar in 2013 to facilitate peace talks with Afghanistan and Pakistan but it closed soon after Taliban representatives raised the flag of their regime. The move angered Afghanistan’s government and ruined hopes for talks.

Pakistani authorities hosted peace talks in early July. But the second round of talks were indefinitely postponed following news of Omar’s death. 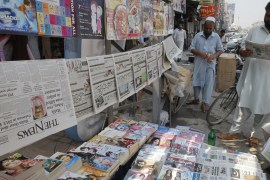