Thousands of Iraqis have demonstrated against the government over the lack of basic services across the country, as rampant electricity cuts exacerbate a sweltering heat wave.

On Sunday, hundreds took to the streets in the southern cities of Nasriyah and and Najaf to protest over poor living conditions, including power shortages, and urged authorities to fight widespread corruption.

About 1,000 people also rallied in the central town of Hillah, where many called for holding government officials accountable for poor public services.

A day earlier, large protests broke out in the cities of Basra and Karbala over the poor quality of water and frequent electrical blackouts.

In Basra, hundreds protested in front of the governor’s office to demand a solution to the long-running problem of salty tap water.

“We demand the dismissal of the governor and of the provincial council; the time has come for Basra’s people to get their rights,” Ziyad Tareq, a student, told the AFP news agency.

When the governor’s deputy went out to hear their demands, demonstrators pelted him with plastic water bottles and insisted on seeing the governor himself.

“The local government is always promising improved water and electricity but they are liars and no longer have any credibility,” Tareq said.

Basra has seen temperatures past 50 degrees Celsius in recent days and the scorching heat is expected to last throughout the week.

Raad Jassim, an employee at the South Oil Co, said Basra residents were increasingly frustrated at their region’s inability to capitalise on its massive oil wealth.

“Basra is feeding Iraq; it is bankrolling the country, and we do not even have water that is suitable for livestock,” he said.

The region is home to the oil fields that account for the vast majority of the more than three million barrels of oil Iraq exports every day.

Yet it remains underdeveloped and has suffered from chronic power outages, poor water quality and uncollected waste.

Security forces were out in force on Saturday around the governorate, less than two weeks after violence erupted during a previous protest against electricity shortages.

“There is security here as if we were staging a coup against the government. We are demonstrating peacefully and all we want is our right to drink clean water,” Mahmud Shaker, a high school teacher, told AFP.

The sentiments were similar in the city of Karbala, about 75km south of Baghdad.

The protesters marched from the neighbourhood housing the Imam Hussein shrine, one of the holiest sites for Shia Muslims, to the governor’s office.

“You are stealing from us in the name of religion,” chanted a crowd that included many students, artists and journalists.

“The matter has gone from bad to worse and it is going to take mass popular mobilisation against those who have been stealing the Iraqis’ money,” protester Ali al-Shaibani said.

“These people have high salaries, properties and electricity 24 hours a day while we remain in sweltering heat.”

In central Baghdad, hundreds of people also gathered on Friday evening to protest against power outages, an enduring problem they blamed on government corruption. 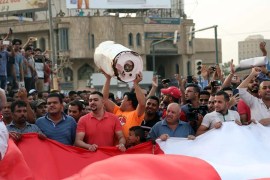 Residents of Basra and Baghdad protest against lack of basic utilities and corruption amid heatwave sweeping the nation. 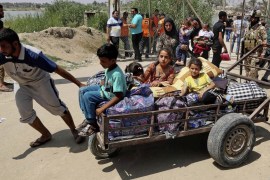