Yemeni forces backed up by the Arab-led coalition have recaptured Aden’s international airport from Houthi rebels as heavy combat took place across the port city following the collapse of a humanitarian truce, the exiled government said.

Backed by air support from an Arab coalition, Yemeni forces launched a wide-ranging assault in Aden this week to reclaim territory held by the Iranian-allied Houthis.

“Aden International Airport and Khormaksar have been cleared of Houthi and Saleh elements by armed forces backing Yemen’s legitimacy and the popular resistance forces, in coordination with and with direct support by the coalition,” Yemeni government spokesman Rajeh Badi said.

He said he expected Aden to be cleared completely within the coming days.

A UN-brokered ceasefire to allow delivery of aid to a city desparately short of food, medicine and other necessities collapsed on Monday after Saudi Arabia said it did not recognise the truce and continued air strikes.

“The fighting in Aden began in the morning as the forces approached Aden from different positions,” said Ali al-Ahmadi, spokesman for the Southern Popular Resistance, which is defending Aden from the Houthis.

“After violent clashes that continued for hours the forces were able to enter the airport and Badr base and they killed a large number of the militias.”

On the humanitarian front, the World Health Organization (WHO) managed to deliver medical supplies to Aden but it said food rations have been delayed.

“It took us days and days and days to organise the safe passage…But it did arrive in Aden last Saturday. It was the first time that we got a convoy into Aden for weeks,” Johannes Van Der Klaauw, the UN humanitarian coordinator for Yemen, said in Geneva.

The UN World Food Programme said a 40-truck convoy carrying enough food to feed 117,000 people for a month had reached Aden province after being held at a checkpoint for days.

But hopes of shipping 500,000 litres of fuel to Aden were still stymied by security problems.

“The area around the port for the last 48 hours has been a war zone,” WFP spokeswoman Abeer Etefa said.

“The President and the King also spoke about the urgency of stopping the fighting in Yemen and the importance of ensuring that assistance can reach Yemenis on all sides of the conflict through international humanitarian channels,” said a White House readout of call.

The UN said that since July 3rd, at least 142 civilians, including 36 children and 27 women, were killed, and 224 others injured.

More than 3,000 people have been killed and more than one million displaced since the conflict broke out. 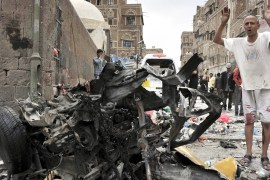