Mexican drug lord Joaquin “El Chapo” Guzman has escaped from a maximum-security prison through a 1.5km tunnel, the government said, in his second jail break in 14 years.

The country’s top security official said on Sunday that the elaborately-constructed tunnel opened into the shower area of his cell in Altiplano prison in central Mexico.

With the brazen escape, the head of the powerful Sinaloa Cartel has done what Mexican authorities promised would not happen after his re-capture last year – slip out of a maximum security prison again.

President Enrique Pena Nieto reacted by saying he wanted a full investigation into the jailbreak to uncover whether any public officials helped the kingpin escape.

Pena Nieto was flying to France on a state visit when news of Guzman’s escape late on Saturday night broke. In a statement read out on Mexican local TV, Pena Nieto said he had confidence the country’s security forces would recapture Guzman.

The gap led to the 1.5km tunnel with a ventilation and light system, Rubido said, adding that its exit was in a building that was under construction in central Mexico State.

A motorcycle on a rail system was found in the tunnel and is believed to have been used to transport tools and remove earth from the space, which was 1.7m high and around 80cm wide.

Eighteen employees from various parts of the Altiplano prison have been taken in for questioning, the security commissioner, Monte Alejandro Rubido, said in a news conference.

Opinion: US drug policy has spelt nothing but trouble for Mexico

The National Security Commission said Guzman was last seen in the shower area of his cell late on Saturday before he disappeared.

The commission also said a search operation was being launched in the surrounding area and that flights had been suspended at Toluca airport near the penitentiary outside Mexico City.

Guzman had been in prison since February 2014.

In more than a decade on the run, he transformed himself from a middling Mexican capo into arguably the most powerful drug trafficker in the world.

His cartel has been heavily involved in the violent drug war that has torn through parts of Mexico for the last several years.

At one point, his fortune grew to more than $1bn, according to Forbes magazine, which listed him among the “World’s Most Powerful People” and ranked him above the presidents of France and Venezuela.

In 2013, the financial magazine took Guzman off the list, saying it was likely security expenses had cut into his trove.

His Sinaloa Cartel took over much of the lucrative trafficking routes along the US border, including cities such as Tijuana and Ciudad Juarez.

Guzman’s play for power against local cartels caused a bloodbath in Tijuana and made Juarez one of the deadliest cities in the world. 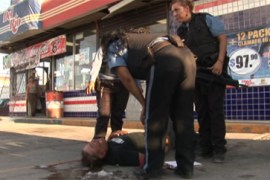 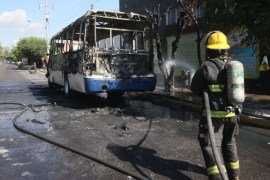