Israeli police say they have arrested several Jewish suspects over an arson attack last month at a shrine where Christians believe Jesus performed the miracle of loaves and fishes.

The arson had sparked widespread condemnation and concern from Christians globally, with the site visited by about 5,000 people each day.

“Several Jewish suspects have been arrested for the burning of the church and the Nazareth court has decided to extend their detention for the purposes of the investigation,” police spokeswoman Luba Samri said on Sunday in a statement on the overnight arrests.

The Church of the Multiplication at Tabgha, on the shores of the Sea of Galilee, is where many Christians believe Jesus fed the 5,000 in the miracle of the five loaves and two fish.

One of the buildings within the compound was completely destroyed in the blaze on June 18 but the church itself was not damaged.

Hebrew graffiti was found on another building within the complex, reading “Idols will be cast out” or destroyed. The text is part of a common Jewish prayer.

The number of attacks on Christian and Islamic holy sites has increased significantly over the past few years.

The Rabbis for Human Rights group said there have been 43 hate crime attacks against churches, mosques and monasteries in Israel and the occupied West Bank and East Jerusalem since 2009. 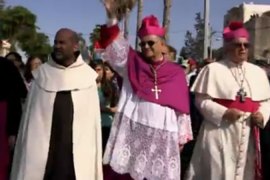 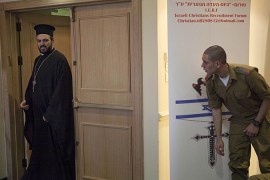 Minority leaders step up efforts against Israel’s drive to force Palestinian Christians to serve in the military. 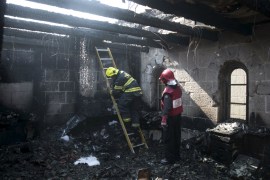 Sixteen Jewish minors from settlements arrested over attack on Church of the Multiplication of the Loaves and Fishes.