Chinese authorities have evacuated more than 960,000 people and cancelled hundreds of flights as a typhoon with wind gusts of up to 200kmph hit the country’s southeastern coast.

Typhoon Chan-hom struck mainland China on Saturday afternoon between the coastal cities of Ruian and Zhoushan, south of Shanghai, according to the country’s national weather service. It said the typhoon might be the most powerful to hit China since 1949.

About 960,000 people were evacuated from coastal areas of Zhejiang province, the provincial Civil Affairs Bureau said. The provincial flood control bureau said 28,764 ships had been ordered back to port by late Friday.

The country’s railway service said more than 100 trains between the region’s cities were cancelled through Sunday.

All flights into and out of Zhoushan were cancelled and bus services and speedboat ferry services halted. Elsewhere in Zhejiang, at least 388 flights were cancelled in Hangzhou, 34 in Ningbo and 37 in Wenzhou, according to the provincial government.

People in coastal fishing farms in Fujian province to the south of Zhejiang were also asked to evacuate Friday morning when the NMC first issued a red alert, the highest level, for the typhoon.

The typhoon is the second storm to hit China in two days after severe tropical storm Linfa made landfall on the coast of southern Guangdong province.

On Saturday night the city of Shanghai will feel the brunt of Chan-hom. The eye sat more or less over the port of Ningbo, just southeast of Shanghai, at 08:00 GMT. The strongest winds, in excess of 160kmph, extend about 100km all around the eye.

Al Jazeera’s meteorologist, Rob McElwee, said most of the risk from the storm comes from sea waters.

“Most coastal damage from hurricanes and typhoons tends to come from ocean flooding as the storm surge inundates all low-lying areas: the entire ocean surface will rise by tens of centimetres as the Chan-hom passes,” McElwee said.

“In the East China Sea, waves of ten metres in height have been reported and as these hit the coast, considerable damage is obviously possible.

“The typhoon will turn slowly away from Shanghai and the Yangtse estuary and cross the Yellow Sea towards North Korea. Here, it will help to relieve the drought.”

By late Sunday, the storm will be reduced in category to “tropical storm”, and winds will be no more than severe gale force. 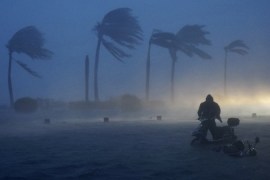 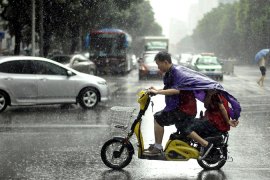 The powerful storm system has caused problems in the east of the country. 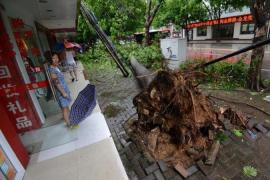 At least 18 people killed and others missing as Typhoon Rammasun makes its way around the country’s south.