The United Nations has announced an unconditional week-long humanitarian ceasefire in Yemen where more than 80 percent of the country’s 25 million people are believed to be in need of some form of emergency aid.

Stephane Dujarric, the UN spokesman, said on Thursday that the truce would start on Friday, July 10 at 23:59 local time until the end of Ramadan on July 17.

“The secretary-general looks forward to the commitments of all parties to the conflict in Yemen to an unconditional humanitarian pause,” he said.

“We feel we have the expressions necessary by all parties to announce the start of this pause on Friday.”

Dujarric said “it is imperative and urgent that humanitarian aid can reach all vulnerable people of Yemen unimpeded and through an unconditional humanitarian pause”.

There was no immediate comment from Yemen’s warring sides.

The announcement came shortly after the UN envoy to Yemen, Ismail Ould Cheikh Ahmed, wrapped up negotiations between the Houthi rebels and officials from the exiled government of President Abd-Rabbu Mansour Hadi in Sanaa.

Relief agencies say the clashes have caused a humanitarian disaster in Yemen, with more than 80 percent of its 25 million people now needing some form of emergency aid.

Al Jazeera’s Kristen Saloomey, reporting from the UN headquarters in New York, said that the aid agencies were poised to move in as soon as the ceasefire would start.

The Houthis have yet to accept a UN Security Council Resolution passed in April which recognises Hadi as the legitimate president and calls on them to quit seized land. 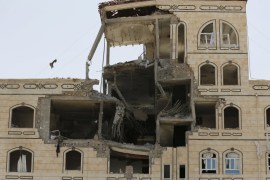 Yemen government tells UN it is ready for ceasefire

Government in exile tells the UN it is ready for a conditional truce on humanitarian grounds, but rebels reject offer.