A second Syrian being brought to hospital for treatment was in critical condition after the mob, alleging that the wounded were rebels, attacked the vehicle on Monday.

“A crowd attacked an ambulance with stones near Majdal Shams on the Golan Heights,” a police statement said, adding that one of the injured “died after the attack”.

I call on Druze leaders to act immediately to calm tensions.

It said two soldiers who were also inside the vehicle had been lightly wounded.

The statement did not identify the Syrians or give further details about their injuries before the attack.

Over the last two years, Israel has provided medical care to hundreds of Syrians, including fighters, usually transferred from the ceasefire line with the Golan Heights in military ambulances to mainly two hospitals in the north.

The Druze accuse rebels of committing atrocities against their community in Syria and have called on Israel to stop treating injured fighters. Instead they call on the government to protect Syrian Druze and some even want Israel to provide them with weapons and air support against the advances of al-Qaeda’s branch in Syria, the Nusra Front.

Public radio earlier said that around 200 Druze from Majdal Shams had pelted the ambulance with stones, forcing it to stop, and dragged the wounded Syrians from the vehicle.

“This is a very grave incident. We will not permit anybody to take the law into their own hands, and we will not allow anyone to hamper Israeli soldiers in the course of their duty,” Israeli Prime Minister Benjamin Netanyahu said.

“I call on Druze leaders to act immediately to calm tensions.”

Tensions have flared in Druze areas of northern Israel and the Israeli-occupied Golan Heights after rebels surrounded a government-held Druze village on the Syrian side last week.

On June 10, at least 20 Druze were killed in an unprecedented shoot-out with al-Qaeda affiliate the Nusra Front in Idlib province in northwestern Syria, the UK-based Syrian Observatory for Human Rights said.

Syria’s Druze minority has largely remained loyal to President Bashar al-Assad since the war began in 2011.

Monday’s attack came hours after another group of Druze also blocked and threw stones at an army vehicle they believed was transferring wounded Syrian rebels for treatment, police said.

Police spokeswoman Luba Samri said the first incident happened in the northern Israeli town of Horfish and that the Druze tried to check the identities of those inside the ambulance.

In a statement, Kara said Defence Minister Moshe Yaalon had told him Israel would not admit fighters from the Islamic State of Iraq and the Levant (ISIL) or the Nusra Front. Israeli officials have said they did not make treatment conditional on casualties’ affiliations.

Israel seized 1,200 square kilometres of the Golan Heights in the Six-Day War of 1967 and later annexed it in a move never recognised by the international community. 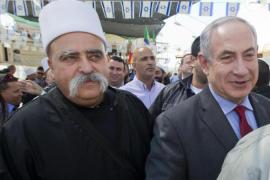 Though over-represented in the Israeli military, some men from the Druze community refuse to serve.