At least six million people in Yemen are in urgent need of emergency food and life-saving assistance, a new United Nations (UN) investigation has found.

The UN report, released on Thursday, said 10 out of Yemen’s 22 governorates are facing an “emergency level” food security situation amid the ongoing conflict, including major areas like Aden, Taiz, Saa’da and Al Baida.

“We are seeing a serious and sharp deterioration of the food security situation because of the ongoing conflict, which is also making humanitarian access difficult,” said Salah El Hajj Hassan, Yemen Representative of the UN Food and Agriculture Organisation.

“Unless access to the affected population is guaranteed to provide humanitarian assistance, further deterioration of the situation is very likely.”

The European Union-funded study said the ongoing conflict has created “a scarcity of staple foods and other essential commodities, disrupting livelihoods, markets, agriculture and fisheries, import, export and commercial activities, among others.”

“With the fluidity of the situation and until a political solution is in place, we will continue to see an increase in the number of people struggling to feed themselves and their families and further deterioration in food security across Yemen,” said Purnima Kashyap, a World Food Programme official.

Talks in Geneva between the exiled Yemeni government and the Houthi rebel group continue to stall, and have been extended until Friday.

As Ramadan, the Muslim holy month of prayer and fasting, started on Thursday, Yemenis in the Houthi-controlled capital Sanaa said they are facing difficulties with the rise of living costs.

The Saudi-led coalition’s campaign and sanctions have meant fuel shortages and power cuts as well as a near halt on imports, leading to inflation in basic food items.

“We are suffering from a lack of water, electricity, fuel and from everything else,” said Sanaa resident Abdullah Saleh.

In Sanaa, tens of men, women and children line up daily to collect water from wells run by charities and what they gather is just about enough for their needs.

Power cuts have added to residents’ woes, especially as the holy month approaches.

“I don’t know how the Yemenis are going to welcome in the first day of Ramadan in light of a total or partial lack of fuel including gas, diesel and petrol and a suffocating food crisis,” said local resident Khaled al Awbaly. 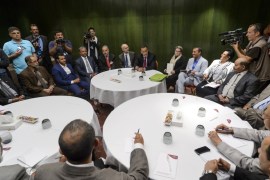 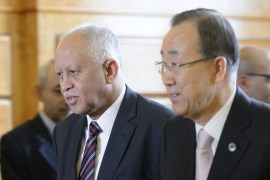 Rebel representatives miss first day of UN-sponsored talks because their plane did not get clearance to take off.