Seven gay and lesbian couples from China have tied the knot in the US after winning a contest sponsored by a pair of Chinese internet companies.

The seven couples were selected from among more than 2,000 based on videos they submitted detailing their love stories, after internet users voted for their top 10 favourites on Taobao, Alibaba’s popular e-commerce site.

The mayor of West Hollywood, a southern California city popular with gay travellers and known for its large gay community, officiated the wedding ceremonies on Tuesday at a city library.

“We’re so honoured and happy to have them in West Hollywood,” Mayor Lindsey Horvath said. “We’ve long been a community committed to equal rights for all people, and advancing and protecting the rights especially of our LGBT community.”

While these couples’ marriages are recognised in California, which legalised gay marriage in 2013, their unions will not be legal in China. China decriminalised homosexuality more than 10 years ago, but still does not allow gay marriage.

“We’ve been together for almost eight years, so we want to give each other a promise or a commitment for life,” said Hu Zhidong, who met his partner, Liu Xin, at a party, where they found out they shared the same birthday.

The prize in the online competition was an all-expenses-paid wedding and honeymoon.

Xu Na and Xue Meng Yao, the only lesbian couple participating in the ceremony, told Reuters news agency that the opportunity to use the event to come out was also important.

“We want to find a proper time to tell our parents,” Xu said. “This could be a good chance for them to see a lot of positive exposure.”

The contest was partly sponsored by Blued, a Chinese-language gay dating app with at least 15 million users.

Geng Le, Blued’s founder and chief executive, said that while many online media outlets in China were interested in covering this event, Chinese television stations might hesitate, because homosexuality was still a sensitive topic there.

Homosexuality is finding increasing acceptance in China but many openly gay men face pressure to undergo sexuality “treatment” or marry a partner of the opposite sex.

Homosexuality was declassified as a mental disorder in the country in 2001. 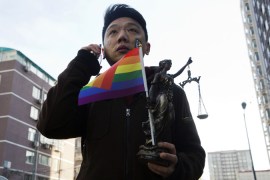 Clinic ordered to compensate man who sued it for administering electric shocks intended to make him heterosexual. 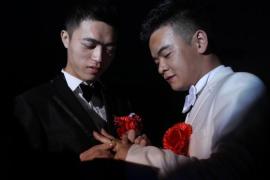