At least 44 people have been killed and more than 100 injured in an air strike at the Yemeni army headquarters in the capital Sanaa, according to the Houthi-run Saba news agency.

Earlier on Sunday, army officials said that four explosions shook the compound in central Sanaa, where soldiers allied with the Houthi group that dominates Yemen had gathered since Saturday evening to get their pay cheques.

“More than 44 citizens were martyred and 100 others [injured] including women and children, according to preliminary figures,” Saba said, adding the air strikes targeted the armed forces high command building in the Tahrir area.

Officials speaking to the AP news agency on condition said only 22 people were killed and that the dead were mostly soldiers. The officials added that the air strikes damaged several nearby homes.

An Arab coalition has been bombarding Houthi rebels and allied army units since March 26 in a campaign aimed at restoring President Abd-Rabbu Mansour Hadi to power.

Residents said coalition aircraft also targeted other military camps east and west of the capital but there was no immediate word on casualties, the Reuters news agency reported.

On Saturday, the Houthis and their allies in the army fired a Scud missile into Saudi Arabia which the kingdom said it shot down, in a major escalation after two months of war.

Coalition air strikes and shelling after the attack killed 38 Yemenis in provinces near Saudi Arabia, according to Saba reports, which could not be immediately confirmed.

ANALYSIS: What is the Saudi-led coalition’s end game in Yemen?

The use of the ballistic missile followed an assault by units of soldiers loyal to former president Ali Abdullah Saleh and Houthi fighters on the border with Saudi Arabia at al-Khouba.

Dozens of rebels and four Saudi soldiers were killed in the clash on Friday.

The conflict has killed more than 2,000 people so far, about of half of whom were civilians. 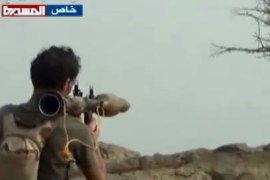 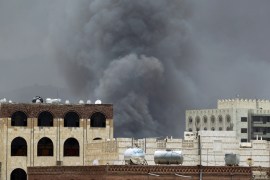 No let-up in attacks as health ministry says 36 police commandos killed in Sanaa and WHO releases new casualty figures. 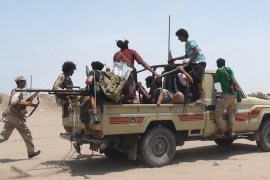