The Greek prime minister has said that his country was close to a default-saving reform deal, but called on EU-IMF creditors to withdraw “absurd” demands for further austerity cuts.

“I believe we are now closer than ever to a deal,” Alexis Tsipras told an emergency parliament session on Friday as he faced criticism from the opposition on the state of the negotiations.

Those who believe that a punishment of Greece will only strike Greece are deeply in the dark.

Greece cannot accept the “irrational” proposal made this week by its bailout creditors, Tsipras said, adding that any deal must also include some lightening of the country’s crushing debt load.

“There is no question of our accepting an agreement that does not contain the prospect of debt restructuring” that would help Greece regain the market access lost five years ago, he said.

Al Jazeera’s John Psaropoulos, reporting from Athens, said: “The government of Prime Minister Alexis Tsipras has received a sound thrashing from opposition parties, such as socialists and conservatives whom he overthrew in January elections.

“They have told him to take the deal now on the table and it won’t get any better,” he said.

The leftist prime minister was presented this week with a tough cash-for-reforms deal put on the table by the country’s international lenders – the European Union, European Central Bank and the International Monetary Fund – that crossed many of the prime minister’s “red lines”.

Psaropoulos said the latest terms present “a roughly 50 percent discount on debt repayment for the next three years”.

“That would leave another $11bn-$12bn in the economy to spend on growth and job creation,” said our correspondent.

“But he [Tsipras] has not been given any relief on the austerity measures that they want him to apply.

Tsipras told parliament that his government would never accept such a deal.

Tsipras said that a “cynical policy of economic asphyxiation and harsh austerity being applied to Greece will ultimately impact other European states in economic difficulty.

“Those who believe that a punishment of Greece will only strike Greece are deeply in the dark.”

The three financial organisations have bailed out Greece twice in the past four years. The debt-ridden country, which owes creditors $270bn, this week extended its bailout repayment for another four months.

Athens and its creditors have been in talks for months over a deal to unlock further aid. But Tsipras said the current proposal was a major step backwards.

“The proposal that was given to me by [European Commission] president [Jean-Claude] Juncker on behalf of the three institutions the day before yesterday in Brussels surprised me negatively,” the Greek prime minister said.

“I could never have imagined that they would offer us a proposal that did not take into consideration in any way the common ground forged over three months of negotiations by the Brussels group,” he told parliament. 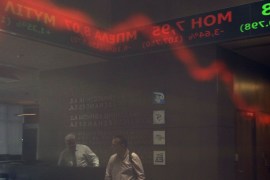 Greece to delay IMF debt payments until end of June

Athens says four payments, one of which was due Friday, to be bundled into single lump sum of $1.8m and paid on June 30.

Eurogroup chief says not enough progress made at debt talks with Greece and that there will be no half-way compromises. 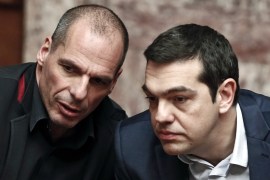 Greek PM warns of difficulties ahead over bailout deal