Uganda’s largest opposition party has threatened to prevent presidential elections from being held early next year, if the government rejects its demand for an independent electoral commission.

Francis Mwijukye, deputy spokesman for Forum for Democratic Change (FDC), said on Tuesday that the party wanted the commission to compile a new and accurate voter register before the polls.

“Uganda’s constitution talks about a free and fair election. Anything less would be illegal,” Mwijukye told the Reuters news agency.

“Our position is that unless we have an independently constituted electoral commission and a new voters’ register, we won’t allow an illegal election to take place.”

He declined to say how the party would prevent the vote.

President Yoweri Museveni, who will have been in power for 30 years in 2016, is widely expected to stand for another five-year term despite widespread criticism of authoritarianism and failure to tame deep-rooted corruption.

The electoral commission has in the past drawn accusations of incompetence and favouritism toward Museveni, who appoints its top officials.

The commission said it had updated the voter register and added new voters this year, and that parliamentary and presidential elections would be held in February or March 2016.

FDC, other opposition parties and civil society groups say the government must amend the election laws to allow a judicial body to appoint electoral commission officials to guarantee their independence.

Besigye has stood against Museveni three times and lost.

Betty Nambooze, a legislator from the opposition Democratic Party, said they would push for an independent poll body and voters’ register but that they would not support a boycott or sabotage of the elections.

“We need to participate so that if they rig, we use that as a trigger to get people on the streets and sweep the dictator away,” she said. 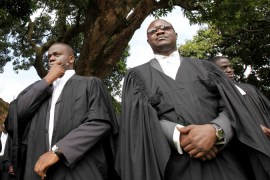 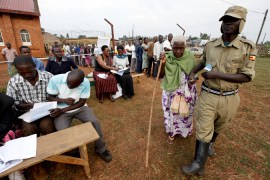 Museveni confident of a fourth term while opposition threatens mass protests if vote is deemed to be rigged. 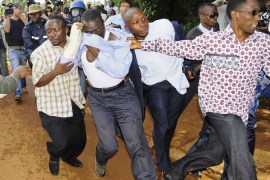 At least two people killed as supporters of Kizza Besigye protest against his re-arrest and high food and fuel prices.