Badi said on Saturday that Hadi would not attend due to the security situation and because Houthi rebels have not satisfied a government pre-condition to pull out of towns and cities they occupy – including the capital, Sanaa.

Hadi fled to the Saudi capital Riyadh along with his government in late March when the Houthis advanced on his southern stronghold of Aden.

UN Secretary-General Ban Ki-moon has urged all sides to attend the talks, which are set to begin on May 28.

In a letter to Ban, Hadi said he was in favour of Thursday’s talks but insisted the UN press the Houthis to pull back, according to the official Saba news agency.

The leader demanded the full implementation of UN Security Council Resolution 2216. The April resolution called on the Houthis to relinquish territory they seized and surrender weapons they took from the army and other state institutions.

Fighter jets from the Arab coalition, meanwhile, launched a fresh wave of air strikes across Yemen targeting Houthi rebels as fighting raged on the ground in the south of the country, witnesses said.

The air raids on Saturday pounded arms depots, controlled by Houthi fighters in the locality of Ghula, in Omran province north of Sanaa, residents said.

They followed similar bombardments of weapons storage facilities in the capital that sparked deadly explosions.

The coalition has stepped up raids on positions it says are held by the Houthis and their allies since a humanitarian ceasefire ended late on Tuesday.

At Hajja in the north of the country, a gathering of Houthis was struck, leaving at least 12 fighters dead, according to the AFP news agency.

The fighting killed at least 28 people, including 17 Houthis and 11 tribesmen, the sources said.

In Aden, clashes raged in the north, east and west of the port city between rebels and fighters loyal to Hadi, military sources said.

The coalition launched the air campaign against the Houthis on March 26 after the rebels seized the capital and advanced on Aden.

The UN says the violence has killed more than 1,000 civilians and displaced close to half a million more. 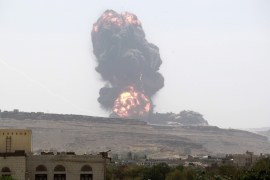 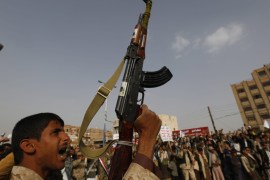 Both Houthis and Hadi government tentatively welcome talks, but reiterate conditions for meeting in Geneva.