Hargeisa, Somaliland – When Nadia*,25, arrived at Berbera Port in early May after a nauseating and protracted 30 hours at sea, she knew nothing about the country where she would be landing. Nadia wasn’t even convinced it would be safe.

“I didn’t even know where Hargeisa or Somaliland was,” said the young woman, who used to work as a civil servant in Sanaa.

But this didn’t stop her, her mother and three sisters from shelling out the $100 a person to make the journey from conflict-ridden Yemen across the Gulf of Aden.

It is here, in the self-declared autonomous nation of Somaliland, which the international community still considers a part of greater Somalia, that Nadia and part of her family are now picking up the pieces after fleeing an escalating war in Yemen.

IN PICTURES: Displaced residents struggle as Yemen’s war grinds on

War broke out in Yemen at the end of March with a Saudi Arabia-led aerial campaign purported to incapacitate the Houthi group that took over the capital in September 2014. Following a recent five-day humanitarian ceasefire, hopes that it would last have been dashed as the bombing campaign continued.

The Houthis, allied with military forces loyal to former President Ali Abdullah Saleh, are also facing fierce resistance from local militias, known as popular resistance committees, in the country’s southern and eastern regions where fighters are also vying to blunt the Houthi offensive.

As new battlefronts open up and casualties mount – 1,850 killed and 500,000 displaced according to the UN’s latest figures – few see a decisive end to the conflict anytime soon. Aid agencies and government officials worry this could further strain nations accepting the Middle East’s newest round of refugees.

According to figures from the International Organisation for Migration (IOM), since the Saudi Arabia-led coalition’s campaign on Yemen began, over 18,000 persons have fled Yemen to the Horn of Africa. A third of those are arriving in Somaliland and Puntland, a semi-autonomous north eastern Somali region.

A vast majority of arrivals are considered “returnees” since they hold Somali citizenship. Many Somalis had fled to Yemen to escape years of civil strife in greater Somalia. Yemeni passport holders are granted refugee status, but both groups are arriving with a sense of uncertainty.

In the absence of economic and physical capacity of Somaliland’s government – and aid agencies that have complained to government officials of their tightening budgets – the burden of assisting those fleeing Yemen’s war is largely falling on local communities.

“A lot of organisations are assuming that communities will support the returnees,” said Hussein Mohamed Osman, the Berbera Branch Secretary for the Somaliland Red Crescent Society. He says aid organisations will offer assistance where they can.

commitment to welcome [Yemeni refugees]. Even the people welcome them. They sympathise with the Yemenis.”]

The United Nations Refugee Agency (UNHCR) is providing financial support to cover transport expenses for returnees from Berbera Port to their place of origin but both government officials and aid workers, speaking on condition of anonymity, have told Al Jazeera that this response is limited in comparison to the overwhelming needs of the refugees.

Nadia knew she had to get out of Yemen when her neighbourhood’s grocery store shuttered its doors in Sanaa. “We couldn’t sit and wait for death,” she said.

One of her neighbours, a native Somali woman who was living in Yemen, had already fled the capital. Nadia called her neighbour for advice. She told the young woman to go to Somaliland. “There are Yemenis there, they can help you,” Nadia recalled the neighbour saying.

Nadia did find Yemenis in Hargeisa, Somaliland’s capital, who are offering help.

“There is no embassy, no consul for Yemenis here,” said Hussam Al-Eyashi, the chairman of the Yemeni Community Center in Hargeisa. “We have had to take that responsibility on.”

OPINION: What is Saudi Arabia’s end game in Yemen?

The Yemeni Community Center has a nascent presence in Hargeisa. Established at the end of 2014 as a burgeoning Yemeni population, it started to take root in this Horn of Africa nation.

The community centre was meant to assist Yemenis in Somaliland – many of whom are business men. They found opportunity in Hargeisa  – as Yemen’s economy collapsed during its 2011 anti-government uprising – and adjusted to a new culture and language. They didn’t anticipate taking charge of war relief. But that’s exactly where they find themselves.

Relying on charitable donations from community members, the centre officials say they are doing their best to lend a hand. They have been providing transport from Berbera to Hargeisa for those that need it and call on their networks to provide housing for those with no other option.

According to government officials, there are no plans to establish a refugee camp. Locals are scrambling to fill this gap in services.

Somaliland says it feels a moral obligation to open its borders. “There is a [government] commitment to welcome them. Even the people welcome them. They sympathise with the Yemenis,” said Abdirisaq Mohamed Saed, the head of the International Cooperation department at the Ministry of Foreign Affairs.

However, Saed, who himself is currently hosting two refugee families, worries about how the country will serve refugees and returnees. “You already see some begging on the streets,” said Saed. “People sympathise with them but for how long?”

Somaliland isn’t well-equipped for an influx of people. It already grapples with its own staggering unemployment rates – 75 percent among youth. Saed believes many Yemenis might have an easier time finding work here, as they bring skill sets not found on the local market. Yemenis, he added, have already proven their ability to establish businesses, but that “it will be a struggle for survival” as more arrive.

A Yemeni businessman has offered to pay a small home for Nadia and her family for two months. But after that, the women know they are on their own.

Asked if they thought they would be able to find jobs to support themselves, Nadia replied, “We will do our best.”

*Pseudonym given at the request of the interviewee 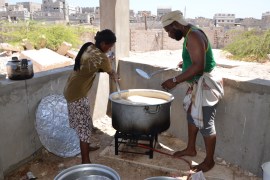 After escaping intense fighting in Aden, residents face new challenges in Mukalla, which has been deserted by the army.