The UN has announced that talks between rival Yemeni parties will take place in Geneva, Switzerland, on May 28 in a bid to end over seven weeks of war.

Ban Ki-moon, UN secretary-general, said on Wednesday the May 28 meeting was to “restore momentum towards a Yemeni-led political transition process” after weeks of conflict that have left 1,850 dead.

“The secretary-general is pleased to announce the launch of inclusive consultations starting on 28 May in Geneva to restore momentum towards a Yemeni-led political transition process,” the UN statement issued in New York said.

It said the initiative, which would bring together the Yemeni government and other parties, including the Houthis, followed extensive consultations by the secretary-general’s special envoy to Yemen, Ismail Ould Cheikh Ahmed.

The announcement came after a three-day Riyadh Conference for Saving Yemen and Building Federal State ended with a final declaration which emphasised the federal nature of Yemen’s future state.

The three-day conference had been due to be announced last week, but the UN demanded that there be a halt in fighting for the talks to go ahead.

Saudi Arabia and its Sunni Muslim allies have carried out almost two months of air raids on Shia Houthi fighters it says are armed by Iran, a major Shia power.

UN-brokered peace talks were suspended when Houthi fighters went on the offensive, capturing Sanaa in September and advancing on Aden, forcing the president, Abd-Rabbu Mansour Hadi, to flee into exile in Saudi Arabia.

Residents said on Wednesday that overnight, Arab coalition jets carried out the most sustained bombardment of Sanaa since the offensive started, hitting army bases and weapons depots.

At least one Saudi soldier was killed by shelling from across the Yemeni border, Saudi Arabia’s interior ministry said.

The Arab coalition has been bombing Houthi forces since March 26 in a bid to restore Hadi to power after the Houthis forced him to flee the country.

Against this backdrop of continuing conflict, Iran has announced that an Iranian cargo ship sailing to Yemen with 2,500 tonnes of food and medical supplies would submit to international inspections in Djibouti before continuing on to Yemen’s Hodaida port, which is under Houthi control.

The move reduces the risk of a potential showdown between the vessel, which had been escorted by Iranian warships, and Saudi-led forces enforcing inspections on vessels entering Yemeni ports to prevent arms supplies from reaching the Houthis.

“We have decided to dock our ship in Djibouti so the United Nations inspection protocol can take place,” Hossein Amir Abdollahian, Iran’s deputy foreign minister, was quoted as saying by the ISNA news agency.

The vessel’s voyage had threatened to escalate the regional confrontation over Yemen. 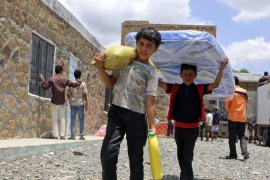 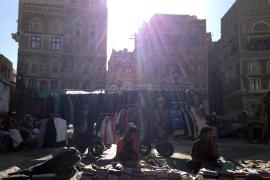