The Pakistani Foreign Office released a statement confirming the deaths, also identifying the wife of the Malaysian ambassador as Datin Habibah Mahmud.

The pilots were identified as Major Altamash and Major Faisal, while the crew member was named Zakir.

In a press conference on Friday evening, Pakistan’s Foreign Secretary Aizaz Ahmad Chaudhry said the crash was due to “engine failure”, and ruled out any possibility of the helicopter being shot down.

He also expressed his grief at the accident, and extended his condolences to the families of the victims.

Pakistani PM Nawaz Sharif and Pakistani Advisor on Foreign Affairs Sartaj Aziz both earlier did the same, in statements from their offices.

The MI-17 helicopter was carrying 17 people, including 11 foreigners and six Pakistanis, the military’s spokesperson Major-General Asim Bajwa said in an earlier statement.

The 10 survivors had “varying degrees of injuries”. The injured are being treated at the Combined Military Hospital at Jutial, about 30km away from the area in which the crash occurred.

The aircraft crashed in the Naltar Valley area of Gilgit-Baltistan, about 300km north of the capital Islamabad.

The crash was due to a “technical fault” while the helicopter was landing, Bajwa said.

Gilgit-Baltistan is located in Pakistan’s extreme north, and is at the junction of three major mountain ranges: the Himalayas, the Karakorum and the Hindu Kush. It is home to more than 100 peaks higher than 7,000 metres. It is also part of the disputed region of Kashmir.

Prime Minister Nawaz Sharif was due to visit Gilgit-Baltistan on Friday, which the diplomats were visiting as part of a four-day tour.

Sharif was en route to Gilgit when the crash occurred, and has now cancelled his visit, state media reported.

He expressed “deep grief and sorrow” over the crash, according to Radio Pakistan.

The helicopter that crashed was part of a group of three, all of which were carrying foreign diplomats on their tour of the area. 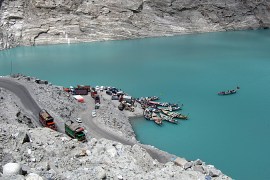 ‘Roof of the World’ rebels against Pakistan

Protests over poor public services have escalated into challenges to Islamabad’s rule in rugged northern territory.