Scientists are celebrating the first collisions of protons in the Large Hadron Collider (LHC) at CERN near Geneva since the experiment underwent a $165 million upgrade.

Scientists hope that the new tests will shed light on dark matter, an invisible particle that makes up most of the universe but has never been directly observed.

Smashing the particles together at low-energy levels and observing where the showers of particles fly will give the teams vital information needed to restart the experiment.

“These low energy collisions are to test and calibrate our detector, and prepare for high energy collisions,” Kate Shaw, a physicist working at the ATLAS experiment, one of several test areas making up the facility, told Al Jazeera.

“Over the past two years ATLAS has been upgraded with new hardware components and software. These must be calibrated and tested.”

The LHC sends tiny particles through super-chilled vacuum pipes at speeds just shy of the speed of light – at almost 300,000 km/s. At full speed particles travel around a 27 kilometer-long loop 11,000 times a second.

The particles are then put on a collision course with a second beam of particles travelling around the pipe in the opposite direction.

The high energy collisions that result are then analyzed to see what they reveal about how particles inside the atom behave.

Despite an initial design weakness, which stopped scientists from running the collider at full power, they still managed to find the previously-unseen Higgs Boson – a particle that gives mass to other particles.

Now, after a two year break, during which technicians replace thousands of magnet connectors, the LHC is again smashing particles together.

“ATLAS will continue the calibration and testing phase over the next few weeks,” says Shaw. “As the LHC ramps up to higher and higher energies we will be at optimal performance and ready for [high energy] collisions.”

Scientists hope to be able to run the LHC at more than 50% high power levels than before.

Smashing particles together at these levels they hope will reveal new insights into the physical world. 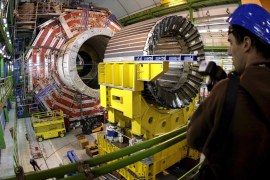 World’s largest particle smasher set in motion as scientists seek answers as to how universe came into existence. 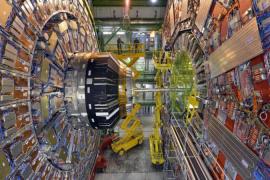 Chinese scientists are designing a particle-smashing collider so massive it could encircle a city.