Kathmandu, Nepal – Pawan Tandukar sat outdoors as a group of volunteers in a central Kathmandu neighbourhood prepared dinner at a makeshift cooking station.

After the devastating earthquake that struck Nepal on April 25 and killed at least 4,700 people, residents in the neighbourhood of Naxal were doing what they could to help each other and the people camping outdoors at the adjacent Nandakishore Park.

The local table tennis association and boxing club were making enough food to feed as many as 500 people that evening, said Tandukar on Tuesday afternoon. They had set up their cooking and feeding operation at a small public recreational space alongside a road.

“We’re providing meals for people who are hungry here, who are not getting food,” Tandukar says.

As they did not have gas, they were using timber from a nearby historic building that had collapsed in the earthquake.

When the earthquake struck Nepal, Tandukar, 50, was sleeping at home and his daughter came running into his room.

“My daughter came and she told [me], ‘Papa! Papa! The earthquake is coming.'” Their house withstood the shaking as they huddled under door frames.

After the earthquake, he and his neighbours ran on to the street to check on each other. Two of his friends’ homes had been destroyed. He found one of his friends, a musician, lying on top of his pregnant wife.

“My friend tried to save his baby… He covered [her] with his whole body so she was saved,” Tandukar said with tears in his eyes. The woman and her child survived, but his friend died.

“He sacrificed his life for his baby,” he said.

The couple was meant to be at the hospital at 12pm as the woman was about to give birth, but they had decided not to go that afternoon.

Staying in the open

On Tuesday, a group of men stood on top of the rubble that had been the musician’s home, while one man stood on the ground, pulling out large pieces of debris with bare hands.

At Nandakishore Park, makeshift tents had been pitched since Saturday, and women and children were mostly camped out there.

Some had lost their homes, while others were still too scared to go home.

Mahima Gachan, 19, was with her mother and sister. Their house was still standing, and their father was staying there and bringing them food.

Sushil Lama, 29, had been in the park since Saturday with her three-year-old daughter and other family members. Her husband works in Dubai. “Everyone here is as communal as possible,” she said.

People lay in blankets on tarpaulin, huddled with their families during the afternoon rain, and people dug small ditches around their tents. A woman knitted. Some had brought their pets.

As the rain let up people milled about. Beneath one large tent a few musicians sang and played on their guitars to a group of Nepalese youths. One man made a stove with two bricks and lit a fire underneath to boil tea.

Lasang Tamang, a 29-year-old software engineer, was with his friends handing out facemasks. “If we wait for the government, then nothing happens,” he said. “It’s small but whatever we can do from our end [we have to do].”

Dr Nivedita Pradhan, 24, a dentist, was volunteering by running a small medical station.

Prabal Thapa is the architect who designed the park. The land was once disputed property and became a dumping ground, but after a decade of fighting to turn it into a community green space that could also be a designated disaster relief site, the park was approved last year and completed a few months ago.

He said this is the only public park with the mandate to be a green space and a refuge in the event of disaster to be created in the last couple of decades. 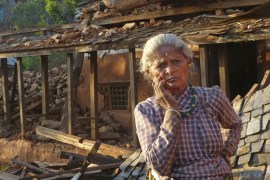 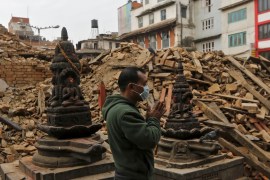 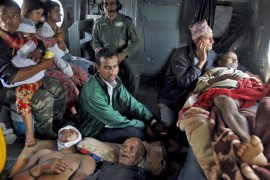