A UN inquiry has blamed Israeli security forces for seven deadly attacks on UN schools in Gaza that were used as shelters for safety during last year’s offensive.

UN Secretary-General Ban Ki-moon said in a statement on Monday that he deplored the attacks that killed at least 44 Palestinians and injured at least 227 others at the UN sites.

“It is a matter of the utmost gravity that those who looked to them for protection and who sought and were granted shelter there had their hopes and trust denied,” Ban added.

The independent board of inquiry also found that weaponry was found at three empty UN schools in Gaza and that in two cases Palestinian fighters “probably” fired at Israeli forces from schools. Ban also called that “unacceptable”.

Al Jazeera’s James Bays, reporting from the UN headquarters in New York, noted that “the UN report says that the three schools where the weapons were found were not being used as evacuation centres, they were empty buildings”.

The 2014 war was the most devastating for Gaza’s 1.8 million people, killing more than 2,200 Palestinians, mostly civilians, according to UN figures. Seventy-two people were killed on the Israeli side, including 66 soldiers.

In one case, the new inquiry found that a UN girls’ school was hit by 88 mortar rounds fired by the Israeli forces. Another girls’ school was also hit by direct fire from Israeli soldiers with an anti-tank projectile.

A third girls’ school was hit by an Israeli missile.

At a fourth girls’ school, the inquiry said, “no prior warning had been given by the government of Israel of the firing of 155 MM high explosive projectiles on, or in the surrounding area of the school”.

The UN released its summary of the report but said the full 207-page report is private. The inquiry looked at 10 incidents. Ban’s statement stressed that the board of inquiry “does not make legal findings” and was not tasked with addressing the wider issues of the Gaza conflict.

Ban ordered the inquiry in November after thousands of buildings were destroyed and at least 223 Gaza schools, either run by the UN refugee agency or the Hamas government, were hit in the fighting.

When Ban visited Gaza in October, he said the destruction was “beyond description” and “much more serious” than what he witnessed in the Palestinian territory in 2009 in the aftermath of a previous Israel-Hamas war.

Ban said on Monday he had established a group of senior managers to look into the inquiry’s recommendations. 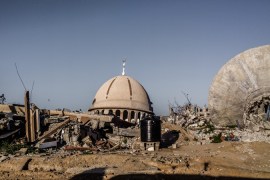 Legal battles on horizon in the ruins of Gaza

Alleged war crimes in Khuzaa and other hard-hit areas of Gaza may come under closer scrutiny in the months ahead.