More than 100 Palestinians rallied near Israel’s separation barrier in the village of Bilin on Friday, with some throwing stones before soldiers opened up with tear gas to disperse the crowd. One protester was wounded, AFP news agency reported.

Prisoners Day is marked every year in solidarity with the more than 6,000 Palestinians in Israeli jails.

“We will not leave our prisoners in jail alone,” rally organiser Abdullah Abu Rahma said.

“We will defend their right to be released, because the majority of them have been arrested illegally by Israeli forces.”

With Israel having arrested some 800,000 Palestinians in the occupied territories since 1967 – equivalent to 40 percent of the male population – almost every Palestinian family has been affected.

During the last round of US-backed peace talks in 2013 and 2014, Israel freed dozens of long-term inmates.

But after the negotiations broke down, and following the kidnap and murder of three Israeli teenagers in the West Bank, Israel arrested hundreds more.

The current number of Palestinian prisoners is the highest for at least five years, according to figures from rights groups. 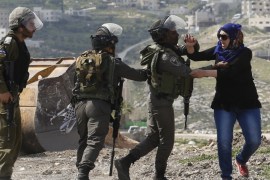 Annual Humanitarian Overview finds more Palestinian civilians were killed in 2014 than any year since the 1967 war.

Al Jazeera examines what to expect when Palestine officially joins the International Criminal Court on April 1. 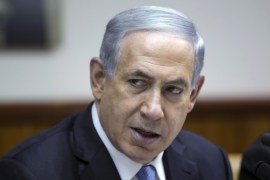