Those same winds brought Beijing its fiercest sandstorm in 13 years on Wednesday, and the Beijing Meteorological Bureau upgraded its alert from blue to yellow, forecasting visibility of less than 1000m for Wednesday night.

With the temperature in Beijing at 25C on Wednesday and the humidity at 35 percent, the breeze from the southwest brought in the dust and visibility gradually dropped.

Pedestrians in downtown Beijing wore masks or covered their mouths and noses with napkins, scarves and hands.

(This level of Particulate Matter is considered hazardous to health and the advice is that everyone should avoid any outdoor exertion and people with respiratory disease, such as asthma, should remain indoors.)

Then, as the wind swung around to a northerly, the temperature dropped to 13C, the humidity fell dramatically to eight percent and the skies and dust gradually cleared.

The wind continued to gust to between 60 and 70kph for the next nine hours.

The encircling province of Hebei had its first sandstorm of the year with road visibility reduced to less than seven hundred metres in several cities.

Dust storms are so common in northern China and Mongolia that they have a name: Asian Dust. About 60 percent of every year’s dust storms occur between March and May.

In these months, the ground is dry and free of snow, which allows strong surface winds to whip up clouds of dust and carry them for thousands of kilometres.

They spread across China to South Korea and Japan, and even to the US.

Asian Dust has become a serious problem due to the increase of industrial pollutants contained in the dust. Intensified desertification in China, as well as the drying up of the Aral Sea of Kazakhstan, has made these storms longer lasting and more intense.

On Thursday, the dust is still swirling around in Inner Mongolia, but Beijing is back to normal, with good visibility and a reducing wind. 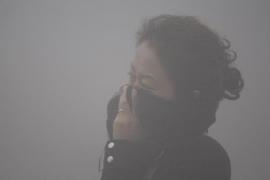 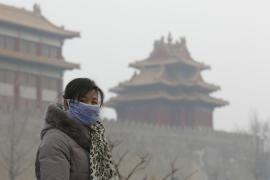 Beijing gets smug to cut through the smog

Humour helps, but the Chinese capital’s record-breaking pollution problem is no laughing matter. 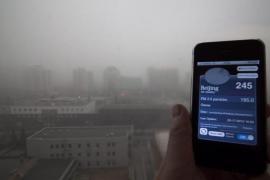 Exposing the ‘hazardous’ pollution of Beijing

A lack of official data and public concern over air pollutant levels have led citizen statisticians to take action.