A bomb has exploded at the gate of the Moroccan embassy in the Libyan capital, a security official said.

Nobody was wounded in the bomb attack, which occurred early on Monday morning local time, he told the Reuters news agency.

The gate and a residential building next to the embassy were damaged, residents said.

Fighters claiming loyalty to the Islamic State of Iraq and the Levant (ISIL) said on Twitter they were responsible for the attack, but it was not possible to verify the authenticity of the claims.

The blast came just hours after gunmen killed two people and wounded a third in an attack on the South Korean embassy on Sunday.

The gunmen opened fire on the embassy compound from a passing car, killing two people and wounding a third, a Libyan interior ministry spokesman told the AFP news agency.

A security source at the location said the two dead were both Libyan guards, adding that while the embassy had been closed for several months, South Korean officials were continuing to use it.

The foreign ministry in Seoul confirmed the attack, saying three South Koreans working in the embassy – including two diplomats – were unhurt.

ISIL-aligned fighters claimed responsibility for the attack on Twitter, according to SITE Intelligence Group.

“The Soldiers of the Caliphate in the city of Tripoli killed two of the guards at the South Korean embassy,” the monitoring group quoted the fighters as saying on Twitter. 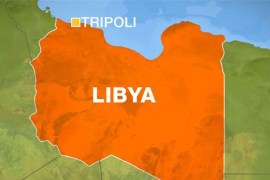 Guards die in attack on S Korean embassy in Libya

Seoul considering evacuating all employees from Libya after dozens of rounds strike diplomatic compound in Tripoli.