One person has been killed and a dozen others wounded when hundreds of protesters clashed with UN peacekeepers in the Central African Republic, local authorities have said.

The demonstrators on Friday in the town of Kaga-Bandoro, about 350km north of the capital Bangui, were angry that the UN MINUSCA mission had failed to stop raids by ethnic Peuhl pastoralists.

“The protesters attacked the town’s aerodrome. To beat them back, the Pakistani blue helmets used tear gas and guns,” the town prefect Gaston Yendemo said, adding that the injured had been taken to hospital.

Among those hurt was a Pakistani peacekeeper.

A statement from MINUSCA said up to 400 people, some armed with weapons, attacked the camp. They threw stones at peacekeepers and tried to force their way through the camp barrier, which they set on fire.

“Given the scale of the attack, the blue helmets needed to react by firing in the air. We deplore the death of one person and several injuries among the attackers,” it said, adding that it was the second attack in a week against the base.

Thousands have been killed and around a million displaced from their homes in violence that has gripped the impoverished landlocked country since the mainly-Muslim Seleka took power in March 2013.

The group gave up power last year in the face of diplomatic pressure and violence by the “anti-balaka” militia, who are mainly Christian or animist, and an interim government was installed. 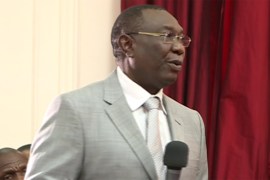 Deal aims to halt hostilities after years of fighting between Seleka and Anti-Balaka. 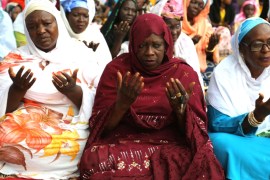