Iranian Foreign Minister Mohammad Javad Zarif has said that Pakistan and Iran should cooperate to solve the crisis in Yemen.

“We need to work together to find a political solution,” Zarif said as he arrived for a two-day visit to Islamabad, in which he was expected to urge Pakistan to reject a Saudi request to join a military operation against Houthi forces in Yemen.

“The people of Yemen should not have to face aerial bombardment,” he said, referring to air strikes by the Saudi-led coalition that started last month.

Zarif said he favoured a four-part plan to impose a ceasefire in Yemen, deliver humanitarian assistance and then establish a broad-based dialogue and finally a broad-based government.

He recommended this to Pakistani, Turkish, and Omani leaders, he said.

Pakistani members of parliament on Wednesday spent a third day debating the Saudi request, with all speakers so far arguing against militarily involvement in Yemen.

Saudi Arabia has accused the Houthis, a Shia rebel group of having links to Iran.

On Tuesday, Nawaz Sharif, the Pakistani prime minister, called on Iran to get involved in talks on security in the Arabian Peninsula.

Al Jazeera’s Asad Hashim, reporting from Lahore, said the talks in Islamabad come against a backdrop of Pakistan trying to position itself as a peace broker in Yemen.

“Pakistan, of course, is treading a fine line on Yemen, between its longstanding alliance with Saudi Arabia and its relatively close relations with neighbouring Iran,” he said. 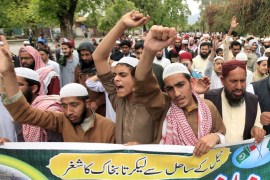 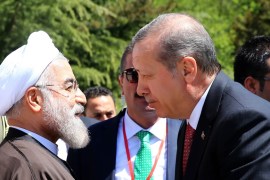 Iran and Turkey back political solution to Yemen crisis

Iranian president tells his visiting Turkish counterpart ceasefire in Yemen “must be established” and strikes halted.