Yemen’s president has called on Houthi fighters to “surrender” at a meeting of the Arab League in the Egyptian resort town of Sharm el-Sheikh, as Saudi-led air raids continued to strike the group’s positions for a third day.

Abd-Rabbu Mansour Hadi, who has fled the country, also called for the continuation of air strikes against Houthi targets on Saturday, as leaders representing 21 nations opened a two-day summit.

“I call for the continuation of Operation Decisive Storm until this gang [the Houthis] announces its surrender, exits all occupied territories in the provinces, leaves state institutions and military camps,” Hadi said.

“Operation Decisive Storm will continue until all the goals are achieved and the Yemeni people start enjoying security and stability.”

Hadi said the Houthis should surrender their weapons and for their leaders to turn themselves in.

Saudi King Salman vowed that the military intervention his government is leading would continue until it brings “security” to the Yemeni people.

The kingdom has vowed to do “whatever it takes” to prevent Hadi’s overthrow, accusing Iran of backing the attempted takeover by the Houthis, who have seized swathes of the country. Tehran denies any interference.

Other leaders, including the leaders of Egypt, Saudi Arabia and Kuwait,obliquely referenced Iran at the summit.

“This nation [Yemen], in its darkest hour, had never been faced a challenge to its existence and a threat to its identity like the one it’s facing now,” Egyptian president Abdel-Fattah el-Sisi said.

Hadi later flew to Saudi Arabia with King Salman and did not plan to return to Yemen until “the situation settles,” his Foreign Minister Riyadh Yaseen said.

US President Barack Obama said Washington shared a “collective goal” with its regional ally to see stability in Yemen.

Obama offered support to King Salman in a phone conversation as it emerged the US military had rescued two Saudi pilots forced to eject from their fighter jet over the sea off Yemen after a technical problem.

Washington has said it will continue logistical and intelligence support for the Saudi-led campaign.

Meanwhile, Yemen’s former-President, who has been accused of backing the Houthis called for an immediate ceasefire and an end to hostilties.

“I call upon everyone to end military operations and stop the killing,” Ali Abdullah Saleh said.

“I call on everyone to resort to reason and initiate a ceasefire,”

“I ask our sons not to be excited and to stop all violence in all provinces,” he added.

Saleh’s comments came after airstrikes continued for a third straight day, hitting targets in the city of Hodeidah on the Red Sea Coast, the Houthi stronghold of Saada in the north, and military installations in and around the capital Sanaa.

Meanwhile, at least 200 UN staff and other expatriates evacuated the Yemeni capital on Saturday, with only “personnel necessary for emergency humanitarian missions” remaining in the country, an aid worker said. 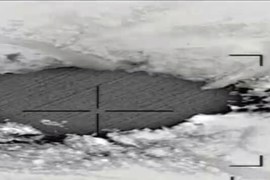 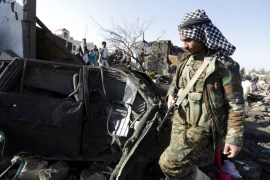