Israeli Prime Minister Benjamin Netanyahu’s Likud party has gained a slight edge over its rivals in early counting, after one of the closest elections in the country’s history.

With around 70 percent of votes counted, Likud was leading with 23.73 percent, the Central Elections Committee said, with the centre-left Zionist Union trailing on 19.06 percent.

Netanyahu had already claimed victory in Tuesday’s election and the initial results seemed to ensure him a third straight term.

“Now we have to build a strong and stable government,” he added.

But Zionist Union leader Isaac Herzog, 54, insisted he was still in the race to form the next government.

“Everything is open,” he told activists in Tel Aviv. “I intend to make every effort to build a real social government in Israel.”

Exit polls published on two TV stations had given Likud and Zionist Union 27 seats each in the 120-member parliament. A third poll gave Likud a one-seat lead.

Netanyahu had put security at the forefront of his campaign, arguing he is the only one capable of protecting Israel from an Iranian nuclear threat and vowing never to allow the Palestinians to establish a capital in east Jerusalem.

The main Arab parties took third place with 13 seats after joining forces to challenge the prime minister, who on the eve of election had ruled out the establishment of a Palestinian state.

Ayman Odeh, head of the Arab Joint List, said it was a “historic day” for Israel’s Arab minority because it would have a greater influence in parliament.

Al Jazeera’s Imtiaz Tyab, reporting from Tel Aviv, said that “this is the first time we’ve seen Arab Israeli parties put aside their differences to work together.

“They have said that they want to sit in opposition, put this is politics and we can’t rule out the Joint List joining Herzog altogether.”

Palestinian group, Hamas, which governs Gaza, said “all the Israeli parties are alike to us”.

“They may disagree on many things but what unite them is their constant denial of the rights of the Palestinians and their will to continue the aggression against our people,” Hamas’ spokesman Sami Abu Zuhri said in a statement.

Saeb Erekat, chief Palestinian negotiator, told Reuters: “It seems to me that Mr Netanyahu will form the next government in Israel and we all heard what he said yesterday … Mr Netanyahu has done nothing in his political life but to destroy the two-state solution.”

Netanyahu, 65, had lagged behind the centre-left Zionist Union in surveys ahead of the vote. But the Likud leader enjoyed a surge after a last-minute appeal to his supporters to go to the polls to counter a high turnout among Arab Israelis.

Herzog, 54, has repeatedly called for the creation of a Palestinian state alongside Israel.

About six million Israelis were eligible to take part in the vote on Tuesday. Turnout was around 72 percent, higher than the last election in 2013.

National elections are held every four years, unless Israel’s parliament, the Knesset, votes to dissolve the government and hold new elections.

The snap general election was necessitated after Netanyahu fired Tzipi Livni, the justice minister, and Yair Lapid, the finance minister in December. 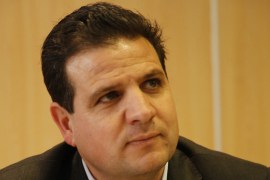 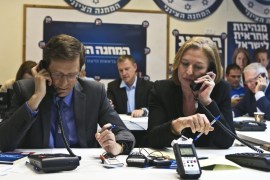 Israel votes in poll seen as referendum on Netanyahu 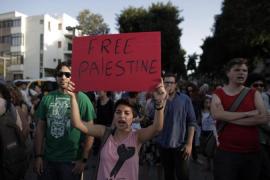 Israel’s dissenting voices get lost in the war echo chamber

Israeli politicians across the political spectrum appear to support the attack on Gaza.