The Democratic Republic of Congo has detained around 40 activists and a US diplomat at a pro-democracy meeting in the capital Kinshasa.

Activists of various African nationalities, including Senegalese and Burkinabe youth leaders visiting Congolese counterparts, were picked up at the event, which was also attended by journalists and musicians.

The US diplomat was detained but later released, according to the Congolese government on Monday.

Kevin Sturr, a USAID official with the agency’s democracy and good governance programme in Congo, was returned to the US embassy on Sunday night, DR Congo’s Information Minister Lambert Mende said.

“There are the three Senegalese and the Burkinabe and their Congolese accomplices who continue to be questioned,” Mende added. “Each will have his fate … either they will be released or put at the disposition of the public prosecutor.”

The arrests come at a sensitive time in Congo’s politics. President Joseph Kabila is due to step down next year after completing his second elected term in office but critics fear his camp is looking for ways to allow him to stay in power.

The pro-democracy event in Kinshasa was being organised by a Congolese movement called Filimbi, which works to encourage youth to engage in politics.

“This event, sponsored in part by the US government, is one of many activities the US government supports that involve youth and civil society as part of our broader commitment to encourage a range of voices to be heard,” the US Embassy said in a statement.

In Washington, State Department spokeswoman Jen Psaki said US authorities have not been officially informed about why Sturr was detained.

“Our ambassador in Kinshasa has raised this at the highest levels with the DRC government,” Psaki said.

Congolese government officials and ruling coalition parties were invited to the event and some attended, it said, describing the youth groups involved as well-regarded and non-partisan.

The foreign activists arrested included Fadel Barro, a member of the Senegalese collective of journalists and hip-hop artists “Y en a Marre”, which helped organise protests against former President Abdoulaye Wade’s bid for a third term in 2012.

Four foreign journalists also arrested at the event were freed on Sunday.

Mende said on Sunday that Congo’s intelligence services believed the event – billed as an exchange between African civil society organisations – was in fact a project organised by “instructors in insurrection”.

At least 40 people were killed in violent protests in January against a revision of Congo’s electoral law that opponents said was meant to delay the presidential poll. 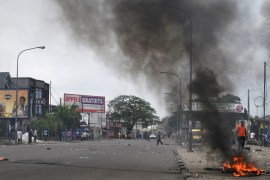 Kinshasa simmers in anger after deaths of protesters

There is public outrage against deadly police action against anti-government protests in DR Congo.