Casablanca, Morocco – Fifteen young men crowd around a doorway separating them from a packed courtroom in Casablanca. Each time the guard opens the door, they wave to anxious friends and family. One by one, each man comes out, and the judge reads aloud his charges: robbery, assault and possession of swords or knives in public, carrying sentences of a year or more in prison.

The men, who were convicted and sentenced late last year, are part of a group known as the Tcharmil – a word taken from the spicy charmoula sauce common in Moroccan cooking.

Tcharmils, a mostly male group, believe they add “spice” to life in a country where about half of Moroccan youth are neither in school nor in the workforce, according to the World Bank. It is unclear how many youth follow the Tcharmil trend, which lacks any formal organisational structure.

Frustrated with what they describe as a lack of opportunities and respect, these youth have found a new way to get the country’s attention: brandishing swords in public and committing petty robberies. Many sport the “faux-hawk” haircut popularised by Portuguese soccer star Cristiano Ronaldo.

“Tcharmil is expressed by young people deprived of things they want,” said 20-year-old Moade Bouzide, who spoke to Al Jazeera under a pseudonym. In his Facebook profile photo, he brandishes three knives. “I would rather die than to live without honour. I cry because I am a man, but I feel I am treated like an animal.”

Last year, Morocco’s King Mohammed VI urged the interior ministry to take strict measures against delinquents, a move followed by mass arrests, including hundreds of Tcharmils. In April, Ahmed Elbhaoui, 26, reportedly committed suicide while in police custody after allegedly having his head shaved by the authorities.

While some Tcharmils have been accused of muggings and robberies, others say they have simply adopted the group’s look to express frustration with a lack of jobs, opportunities and respect for youth in the North African kingdom. According to Taieb Belghazi, a Mohammed V University professor who studies social movements, the Tcharmils reflect the discouragement felt by many Moroccan youth.

“These are young people who want to seek some kind of recognition,” Belghazi told Al Jazeera. “Taking actions that make them feel empowered or powerful enables them to get some feeling of notoriety, of importance.”

Belghazi, who has studied the Tcharmil phenomenon, says Moroccan youth – and especially those who adopt the Tcharmil look – are considered a threat to many Moroccan residents.

“[Many Moroccan] young people are very much into hooliganism … unruly attitudes and so on,” he said. Tcharmil youth, Belghazi added; are “getting back at the people who construct them as awful to gain some sense of being and of recognition.”

Tcharmil Simo, a 23-year-old Tcharmil who spoke to Al Jazeera under a pseudonym, said the group provides an alternative to what he considers an otherwise mundane and dissatisfying life in Morocco. “I find Tcharmil as a way to escape from my problems,” he said, citing family discord and financial struggles.

But many Moroccans have little sympathy for young people who rob and steal – no matter how unfortunate their home lives may be.

“Financial and social problems aren‘t a good excuse to be a Tcharmil,” said Rachid Bouamri, a Moroccan lawyer who has seen many Tcharmil cases involving theft and assault go through the courts.

Most of the Tcharmil commit the same crimes again and again. They consider jail home.

“Most of the Tcharmil commit the same crimes again and again,” he said. “They consider jail home.”

Interior Minister Mohamed Hassad has acknowledged the problem with Morocco’s Tcharmils, noting in a statement last year: “The government, in cooperation with the police, are doing our best to stop those who make people unsafe and fearful, so we are organising security campaigns all over the country to bring safety back.”

Some Tcharmils, meanwhile, say the trend does not have to entail a life of crime. To them, it is about being stylish, boasting on Facebook about their Tcharmil identity and in some cases, pretending to be a criminal.

“Tcharmil is the perfect way of life,” Mourad, a member of the movement who did not provide a last name, told Al Jazeera. “Stylish and free is what I want to be.”

Belghazi said few Tcharmils have become actively involved in politics, despite their dissatisfaction with life in Morocco. In the past, he noted, young Moroccans could migrate to Europe in search of a better future. But between 2008 and 2012, migration from Morocco to Spain dropped by about two-thirds.

The group’s methods, however, may be hampering their chances further – and some Tcharmils readily acknowledge this fact. Simo said he regrets leaving school, and expressed remorse for his lifestyle and choices.

“I still love Tcharmil and post pictures on Facebook, but I know this life is not healthy,” he said. “Now it is too late to change my life. I hope [other] youth will have a better life and a chance to build a healthier life.”

Frankie Stiles spent several months in Morocco on an SIT Study Abroad program and produced this story in association with Round Earth Media, a nonprofit organisation that mentors the next generation of international journalists. Aicha Ouzzine contributed reporting. 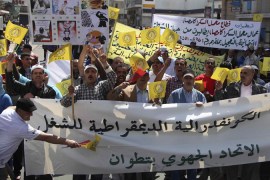 Protesters in Casablanca accuse the government of failing to deliver on the pledges of social justice. 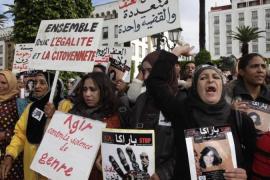 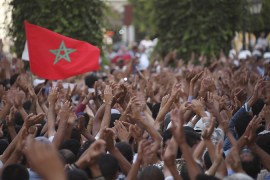