The weekend death toll in the vacation-packed French Alps has risen by one after a man was killed in an avalanche in the Taillefer range.

The man’s death on Sunday came just one day after four people perished in a snowslide in Switzerland.

The death toll so far this season from avalanches stands at 56 in France and Switzerland alone. At least five people have lost their lives in the Austrian Tyrol. One died while carrying out an official avalanche risk assessment.

Alpine sports are fun, but dangerous. The best conditions come with deep snow arriving regularly at low temperatures. That way it all compresses nicely and the snowpack remains stable.

The worst conditions are a huge snowfall on top of an icy surface.

Near the end of the season, as spring approaches, it is more and more likely that temperatures will rise above freezing by day and fall below by night, forming an icy, slippery crust. If it then snows, as is now happening on many alpine slopes in both Europe and Japan, that snow will probably be unstable.

An avalanche can be very easy to start and most mornings you can hear cannon fire in alpine regions, used to set off avalanches and clear the unstable layer.

This is such a well-recognised winter risk that ski slopes are groomed daily to make the pistes smooth and safe to use. The danger usually comes if you go “off-piste”, into the powdery snow. 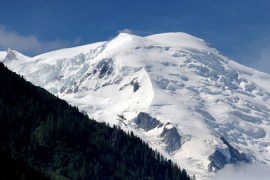