Three Al Jazeera journalists who were in an Egyptian jail for more than 400 days have been awarded a prestigious British journalism prize.

The Royal Television Society on Wednesday presented its Judges’ Award to Peter Greste, Baher Mohamed and Mohamed Fahmy in recognition of an outstanding contribution to the advancement of television journalism.

“Tonight the RTS recognises the three ‘brothers’ as Peter has called them. The released one and two on bail; Peter Greste, Mohamed Fahmy and Baher Mohamed.

“Men who conducted themselves with enormous dignity and courage in the face of continued uncertainty about their fate. And we also recognise the commitment of the people who have campaigned and continue to campaign for the release of the two on bail.”

The trio were put in prison by the Egyptian authorities on 29th December 2013.

Greste was only finally released earlier this month, while the ordeal for Mohamed and Fahmy continues – they were bailed last week pending retrial.

Accepting the award on behalf of all three, Greste thanked his fellow news professionals.

“I’d be willing to bet this award that journalists have never united around a single common cause in the way that they have ours. I know how important it has been.

“For us, in prison of course we knew a bit about it. We were aware of some of the demonstrations; we’d heard about the zip-the-lips campaign and the letters.

“At the personal level, it was hugely empowering. It helped put rods of steal into our spines, because we came to understand that this was about something far bigger than the three of us alone. It was about the universal principles of freedom of expression, about the public’s right to know. And we knew you were right there with us.”

Stewart Purvis, Chair of the RTS Television Journalism Awards, said: “I think I am right in saying that this is the first time that the judges have sat down and decided to choose a group of individuals who were, at the time, in prison.

Two seats were left empty at the ceremony for Mohamed and Fahmy as they could not attend due to the bail conditions. They will be back in court on Monday 23 February. 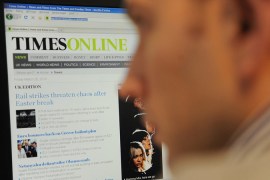 The decline in classified advertising revenue has “tied the hands of the traditional press”, most notably in the West. 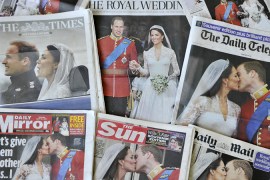 Media and journalism: the wedding crashers

Nowhere to hide as media coverage of the ‘wedding of the century’ forces all and sundry to witness the great charade. 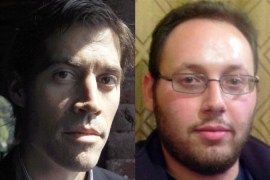 ‘Barbaric’ year for journalism as 66 slain