Saudi Arabia has suspended operations at its embassy in Yemen, and evacuated its staff due to the deteriorating situation in the capital, Sanaa, controlled by the Houthi rebels, the foreign ministry has said.

“Due to the deteriorating security and political situation in the Yemeni capital, Saudi Arabia has suspended all embassy operations in Sanaa and evacuated all its staff, who have arrived safely in the kingdom,” said a statement carried by the official SPA news agency on Friday.

The kingdom is the first Arab country to evacuate embassy staff from Sanaa, after several Western governments, including the United States, shut their missions this week, after the Shia armed group took over the government in a coup.

Al Jazeera’s Jamal Elshayyal, reporting from Taiz in southern Yemen, said the Saudi decision is another sign of “a lof of deterioration in the security front”.

At the same time, it could also be a political move “to increase the pressure on the Houthis to withdraw”.

He said that the Houthis “need some sort of international legitimacy,” and the closing of the embassies undermine their continued stay in the capital.

Saudi Arabia is leading a diplomatic effort in New York, asking the UN to pass a resolution demanding the withdrawal of the Houthis from Sanaa.

Earlier on Friday, Italy also announced the closing of its embassy.

On Thursday, Ban Ki-moon, UN secretary-general, said Yemen was “collapsing before our eyes” and slipping closer to outright civil war. 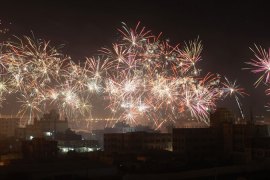 Rebels strengthen positions in Sanaa, celebrating their advance, while continuing to raid their rivals’ buildings. 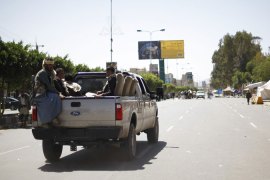