CHAPEL HILL, NC – Namee Barakat, the father of one of the three slain students killed in their home in the college town of Chapel Hill, North Carolina, has said he believes the murders of his son, his daughter-in-law and her sister were motivated by hate, and that the killer acted purposefully.

“Absolutely it’s a hate crime, no ifs or buts about it. It is just as clear as it can be,” Barakat told Al Jazeera.

Of the investigation currently under way by local and federal law enforcement Barakat said, “we won’t accept anything less” than that finding.

Those sentiments were echoed by family and friends of the victims, 23-year-old University of North Carolina dental student Deah Shaddy Barakat, his wife, 21-year-old North Carolina State  (NCS) graduate Yusor Mohammad, and her sister, 19-year-old Razan Abu-Salha, who was a student at NCS.

All three were buried on Thursday in a service that was attended by an estimated five thousand people.

“We ask that you celebrate the memories of our family members. We are still in a state of shock and will never be able to make sense of this horrendous tragedy. We appreciate your concerns and the outpouring of love and support”, said Suzanne Barakat, Deah’s sister.

On Friday, US President Barack Obama announced that the Federal Bureau of Investigation has opened an investigation on the case.

“No one in the United States of America should ever be targeted because of who they are, what they look like, or how they worship,” he said.

The suspect in the killings, 46-year-old Craig Stephen Hicks has been charged with three counts of first degree murder.

In its initial statement, Chapel Hill Police said, “our preliminary investigation indicates that the crime was motivated by an ongoing neighbour dispute over parking”.

That explanation outraged many in the community, and launched renewed debate across the country over the treatment of Muslims in the US.

“We are concerned that the anti-Muslim rhetoric may have angered some to commit violence against American Muslims,” said Azhar Azeez, president of the Islamic Society of North America who was among those in attendance.

“We ask our administration, our president to take a stand and to say that bashing Muslims is not acceptable in this country,” said Osama Abuirshaid, National Coordinator for American Muslims for Palestine.

The father of the two women killed was clear about what the family expected from this investigation. “We want this acknowledged for what it is,” said Mohammad Abu-Salha at Thursday’s service.

The murder he said had “hate crime written all over it”.

“I just want to recommit that we are examining every possible angle to include the potential for a hate crime.”

The FBI has also launched its own investigation.

The suspect in the deaths of the students had at least a dozen firearms in his home, according to search warrants released on Friday.

Warrants filed in court listed an inventory of the weapons seized by police, including four handguns, a pistol that Hicks had with him when he turned himself in to the police about an hour after the shootings and two shotguns and six rifles.

Whether the police determine that the crime was inspired by hate or not, members of the Islamic community, both locally and nationally, have called for peace and unity in the aftermath of the tragedy.

Omid Safi, a professor and the director of the Duke Islamic Studies Center, said that many local Muslims had expressed fear after the murders. Still, Safi said that it was important to overcome such fears.

“You’re seeing an attempt to not stay segregated and separate from the larger Chapel Hill community but to reach out to people for support, solidarity,” he said.

“That’s meaningful. That’s a wonderful sign, and I hope we keep following in the direction.”

A vigil held in the victims’ honour Wednesday night provided an opportunity for many in attendance to become familiar with the three victims, and learn about the promise their lives held.

More than a thousand people came to show their support.

Speaker after speaker described the three as “winners”.

Deah was a second-year student at UNC’s School of Dentistry after graduating from NC State.

Yusor also graduated from NC State and planned to enroll in UNC’s dentistry school this fall.  Razan excelled as an undergraduate architecture student at NC State.

The three victims were all involved in charity work, and those that survived them attested to their character and generosity.

Tiffany Brannan, the director of communications at the dentistry school, remembered a time when Deah purchased a coffeemaker for the school when he noticed it needed one.

“She was kind and loyal, she was the best friend anyone could ever have,” said NC State student Yasmin Aniya of Razan, speaking through tears.

“We spent every single day together, texted every day, she was my best friend. She was my sister.”

Aniya said she plans to run a half marathon in Razan’s name to raise funds for Deah’s dental relief effort.

Brannan said Deah was raising money for a group he was involved in called Syrian Dental Relief to travel to Turkey to provide dental care to Syrian refugees living there.

The website shows Deah making a personal appeal for people to help donate to help the refugees.

His father wanted people to know that all three were peace-loving souls.

“Deah [Barakat] and his wife [Yusor Mohammad] and her sister [Razan Abu-Salha] are the most peaceful individuals that you would ever want to meet,” he told Al Jazeera.

“They would not argue with anybody, they would not say anything to anybody outside of the decent way of speaking. They would not use cross words whatsoever. They are just, very close to perfect.” 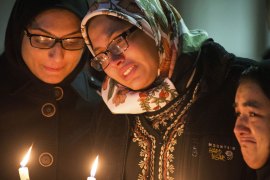 Turkish leader criticises US President for his silence after the killings of three Muslim students in North Carolina. 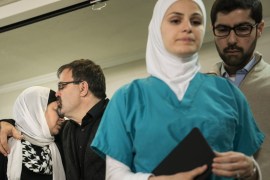