Barack Obama, the US president, has confirmed the death of a US hostage held by the Islamic State of Iraq and the Levant (ISIL).

The White House issued a statement on Tuesday confirming the death of Kayla Mueller, who had been reported killed in an air strike against ISIL positions carried out by the Jordanian military on Friday.

“No matter how long it takes, the United States will find and bring to justice the terrorists who are responsible for Kayla’s captivity and death,” Obama said in a statement.

Mueller’s family also released a statement saying they were told she had died.

In a statement posted on websites sympathetic to the armed group, ISIL claimed that Mueller was buried beneath rubble after an air raid by a Jordanian fighter jet in Raqqa, northern Syria.

Speaking to reporters, the White House press secretary, Josh Earnest, did not confirm whether Mueller was killed by the Jordanian bombing campaign, saying there was no evidence that civilians were in the target area ahead of the strike.

The 26-year-old from Prescott, Arizona, was taken captive in August 2013, in the Syrian city of Aleppo, after leaving a Doctors Without Borders hospital, according to a family statement released by Arizona Senator John McCain.

Mueller’s parents said their daughter had devoted her career “to helping those in need in countries around the world”, since graduating from Northern Arizona University in 2009.

Mueller lived and worked with humanitarian aid groups in northern India, Israel and the Palestinian territories, before returning home to Arizona in 2011 and working at an HIV/AIDS clinic and a women’s shelter. 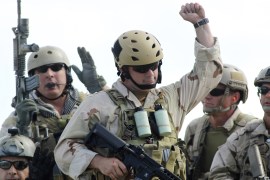 Are special forces the answer to the ISIL fight?

As the fight against ISIL continues, are highly-skilled western forces a quick fix?

After the brutal murder of a Jordanian pilot, Al Jazeera asked residents how the country should respond.