Malaysia’s highest court has upheld opposition leader Anwar Ibrahim’s conviction on sodomy charges and his five-year prison sentence in a case he and his supporters have denounced as a fabrication.

The Federal Court’s judgement on Tuesday upheld a ruling by the Court of Appeal in March last year, which found the 67-year-old guilty of sodomising a former political aide.

Addressing the court, Anwar accused the panel of justices for taking part in a “political conspiracy” by Malaysia’s ruling regime.

A statement by the Malaysian government said on Tuesday: “The judges will have reached their verdict only after considering all the evidence in a balanced and objective manner. Malaysia has an independent judiciary, and there have been many rulings against senior government figures.”

Hee Loy Sian, a fellow MP from Anwar’s party, told Al Jazeera that the opposition People’s Justice Party will meet in a few hours to decide on its next steps following the judgment.

“It is an injustice. There are some political influences. There is no independence of the judiciary. It is a black history for Malaysia. How can the leader of the opposition be jailed?”

In an interview with Al Jazeera, Anwar’s lawyer Rasiah Sivarasa, said that the case was “politically motivated.”

He claimed that Anwar’s main accuser had met then deputy prime minister Najib Razak, now the country’s leader, before filing the case against Anwar.

Al Jazeera’s Sohail Rahman, reporting from the city of Putrajaya, said Anwar’s wife, who is also the president of the People’s Justice Party, cried at the court and asked for a private moment with her husband following the announcement of the verdict.

Rahman said Anwar’s lawyers had argued during the appeal hearing that DNA evidence against him was tainted, a claim rejected by the court.

Sodomy is illegal in Muslim-majority Malaysia where the offence carries a jail term of up to 20 years.

In a statement on Tuesday, Human Rights Watch, the US-based rights group, said that t he conviction of Anwar Ibrahim after seven years of politically motivated proceedings under an abusive and archaic law is a major setback for human rights in Malaysia .

Anwar had told Al Jazeera  he was optimistic ahead of the ruling: “I’m cautiously optimistic, but I’m also realistic. I’m mentally, spiritually and physically prepared to return to jail.”

He said going to jail would be a small price to pay in his “struggle for freedom and justice for all Malaysians”.

“Whether it’s five years or 10 it doesn’t matter to me anymore. I have to fight them, of course. They can give me 20 years. I don’t give a damn.”

Anwar was accused of sodomising a male aide in 2008, but was acquitted by the High Court in 2012.

However, the Appeals Court overturned the acquittal in March last year and sentenced him to five years in jail. He has said the charges were trumped up to kill his political career.

Many said that Anwar is the most potent threat to Prime Minister Najib Razak, whose party has ruled Malaysia since independence in 1957 but faces declining support.

Anwar previously was imprisoned for six years after being overthrown as deputy prime minister in 1998 on earlier charges of sodomising his former family driver and abusing his power. He was freed in 2004 after Malaysia’s top court quashed that sodomy conviction.

Meanwhile, Sholto Byrnes, a senior fellow at the Institute of Strategic International Studies Malaysia, defended the court’s verdict saying it is “not a case about the government versus Anwar Ibrahim.”

“This is about a young man, who was a young aide for Anwar Ibrahim. He alleged that he was forced into a nonconsensual sex with his employer. That’s a very serious charge, and that’s why the prosecution took it seriously.” 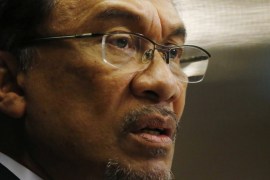 Q&A: Anwar optimistic prior to conviction being upheld

Malaysia opposition leader “cautiously optimistic” ahead of ruling affirming his conviction and jail term for sodomy. 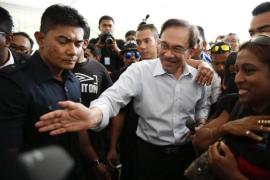