After the worst flooding in more than 40 years, Albania’s Prime Minister Edi Rama has pledged to compensate flood victims in the country’s south.

Around 600 families have been evacuated from their homes in four southern districts in recent days as floods inundated more than 17,000 hectares and killed more than 3,500 sheep.

The first week of February saw 283mm of rain falling in Gjirokaster district – more than twice the average rainfall for the entire month of February.

Although no significant rainfall is expected in the coming days, any precipitation which does fall could be in the form of snow.

Cold weather is expected to sweep across much of the Balkans in coming days with sub-zero nighttime temperatures set to add to the misery of those residents still waiting for the floodwater to subside.

Army units have been deployed to bolster flood defenses and to deliver food and supplies.

Speaking on Sunday, as he visited the region of Fier, hit by the flooding of the River Vjosa, Rama blamed the damage on years of neglect by previous governments.

Soil erosion, deforestation and poor river management were the fault of previous administrations, he claimed.

In recent years many trees, close to rivers such as the Vjosa, Osum and Shkumbin have been cleared by villagers for building and fuel, or by companies developing dams and other construction projects.

“There are some critical hotspots where disasters can occur,” he told the UK’s The Guardian. “We could have very bad surprises. The dam reservoirs are old and have not been maintained. This is where the most dangerous part of this scenario is.”

In Novosela, within the floodplain of the Vjosa, much of the agricultural land remains under water. It was reported that the river rose by 20cm an hour until it was one metre above normal levels. Roads and railways, and then houses were submerged by the rising waters. 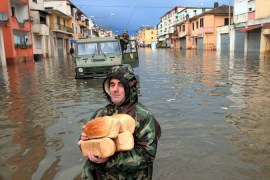 More than 11,000 people evacuate the northwestern part of Albania after severe floods. 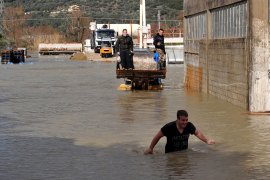 Torrential rain and storm force winds have caused disruptions across the Balkans.