At least 6,000 protesters have marched through Haiti’s capital to demand lower fuel prices and the ouster of President Michel Martelly.

The protest in Port-au-Prince on Saturday remained peaceful overall although police briefly threw tear gas and dispersed a crowd that had burned rubbish and tyres in the street to block traffic.

The protest, which diminished in strength as the afternoon wore on, was the latest in a series of demonstrations over recent weeks fuelled by anger over fuel prices.

The government recently lowered the price of gasoline by about six cents to $1.19 a litre and diesel prices dropped by about five cents to $0.94, but protesters say the reductions do not fully reflect the global drop in oil prices.

“The cost of living is too high,” said Joel Pierre, a welder who joined Saturday’s protest instead of going to work.

He told the AP news agency he also would join in a two-day general strike scheduled to start on Monday that is aimed at forcing a shutdown of schools, banks and other institutions.

“We need to let the government know that this is serious,” Pierre said.

Bus drivers went on strike for two days earlier in the week, leaving hundreds of thousands of workers and students stranded.

In protests on Monday, at least three people were wounded by gunshots in a neighbourhood south of Port-au-Prince during clashes between protesting youths and police – and automatic weapons fire was heard around the capital as protesters smashed car windows with stones and blocked roads.

Protesters also remain angry that Martelly began ruling by decree last month after parliament was dissolved. Long-delayed elections have not been held. 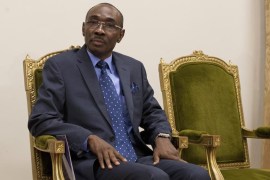 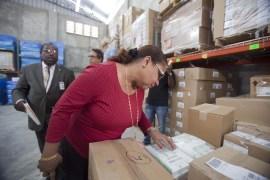 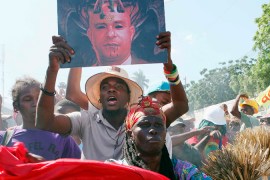 Decision follows demonstrations in several cities in support of new elections and resignations of PM and president.