Ramallah, West Bank – Just outside of Ramallah, on the edge of the main West Bank north-south artery known as Road 60, a large green road sign is hard to miss. It indicates that the Israeli settlements of Kokhav Yaakov and Geva Binyamin are nine kilometres to the south, while Pesagot is another 13km away.

Just south are the Palestinian villages of Deir Dibwan, Burqa, Mikhmas and Jaba – but they are not mentioned on any of the major signs on the highway. This is a situation replicated across the West Bank, where approximately 150 settlements peppering the higher elevations are connected by a network of roads.

A United Nations report said this network is “primarily for Israeli use that specifically link West Bank settlements to each other and to Israel … Palestinian access on to this network is restricted by a closure regime consisting of … checkpoints, roadblocks and a permit system for Palestinian vehicles.”

Israeli authorities have long banned the Palestinian Authority (PA) from putting up its own road signs that refer to Palestinian towns and villages. This is true mostly for population centres in Area C, the more than 60 percent of the West Bank under Israeli administrative and security control.

The Israeli Coordinator of Government Activities in the Territories said: “The matter is being checked and addressed.” COGAT is an Israeli defence ministry unit that encompasses the Civil Administration, the Israeli governing body in the West Bank.

On an intersection on a two-lane highway in the northern West Bank, cars, lorries and taxis whiz by, travelling to various destinations. But it is difficult for Palestinian travellers here to pinpoint where they are; street signs only indicate where the nearest Israeli settlements are.

“We normally know this street as the ‘Yitzhar line’,” said one truck driver, referring to the settlement thrust in the heart of three Palestinian villages; Burin, Madama and Asira al-Qibliyeh. “We are between Qalqiliya and Huwara. There isn’t anything to indicate where Nablus or Qalqiliya are except Yitzhar.”

Not only are the proper names of Palestinian locales – in either Arabic, English or Hebrew – often absent from street signs, but in some cases, even the Arabic spelling of Hebrew names has been painted over or erased.

“We got used to the Hebrew name of the area because there are no other signs,” one taxi driver told Al Jazeera. Another added: “We have a hard time getting to places. We have to ask for directions the whole time.”

In 2009, the PA kick-started a US-funded project to install road signs in Arabic and English script. The $20m project was expected to last four years. However, about half of the signs were not erected because of Israeli opposition, and the project was subsequently shelved.

Israel does not allow us to erect street signs, especially on main streets and bypass roads in Area C. We managed to put up signs inside Palestinian population centres, but not outside.

“Israel does not allow us to erect street signs, especially on main streets and bypass roads in Area C,” Mohammad Jabarin, the deputy minister of local government, told Al Jazeera. “We managed to put up signs inside Palestinian population centres, but not outside.”

That has not made it easier for Palestinians to navigate their way through the West Bank, carved up by a matrix of Israeli infrastructural obstacles, including the separation wall, about 100 fixed checkpoints, concrete blocks, and earth mounds.

Critics contend that the Israeli military occupation has not only effectively changed the landscape, but also affected Palestinian memory “through visual and linguistic manipulation.”

Others say the presence of Israeli military infrastructure has affected Palestinians’ usage. Places like Qalandiya, the name of a West Bank refugee camp, are now synonymous with the checkpoints thrust in their midst.

“The most imminent danger is when the colonial terms are used by individuals under occupation,” said Abaher el-Sakka, a professor of social sciences at Birzeit University.

Another danger, according to Sakka, is “erasing the memory of the place, connected to the original owners of the land, by using names that serve the interests of the colonisers, and this means the ultimate success of the colonial project”.

Sakka’s fears do not seem to be inflated: Many drivers on the “Yitzhar line” could not name the nearby Palestinian villages where the settlement was built. “There’s no Arabic name for this area,” said one taxi driver. “There’s an Arab village here, but I can’t remember its name, because there are only Hebrew signs.” 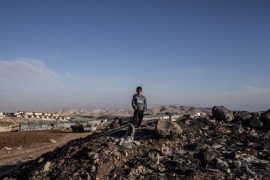 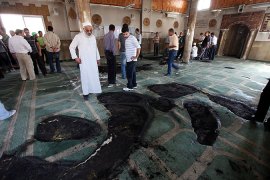 Israeli PM terms the attack “a criminal act” and promises to act “decisively” against perpetrators. 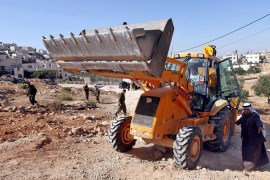