Ramallah – The past year has been one of the most tumultuous for Palestinians in recent memory. The occupied West Bank suffered a severe crackdown after three teenaged Israeli settlers were kidnapped and murdered. The besieged Gaza Strip experienced its third and bloodiest war, Operation Protective Edge, with Israel since 2009. Jerusalem was the epicentre of sectarian violence surrounding the al-Aqsa mosque compound, a holy site and symbol of national identity for Palestinians.

At the end of December, Palestinian officials submitted a resolution to the United Nations Security Council (UNSC) to set a firm date for the end of the 47-year Israeli occupation. The resolution failed to garner enough votes to pass, and the United States was not forced to use its veto power to block the resolution.

Following the failure of the resolution, Palestine joined the International Criminal Court (ICC), a move that could put Israeli officials on trial for actions in last summer’s Operation Protective Edge.

In spite of this, Palestinians are no closer to achieving their national aspirations. Al Jazeera spoke with Dr Hanan Ashrawi – a Palestinian legislator, head of the Palestinian Liberation Organisation (PLO) Department of Culture and Information and member of the PLO Executive Committee – about the future of the Palestinian national project.

Dr Hanan Ashrawi: Well, we want a resolution that is entirely consistent with international law, like the previous resolution. It calls for a state based on the 1967 borders with East Jerusalem as the capital, a firm deadline to end the occupation, and addresses the situation of Palestinian refugees.

If the resolution contains the substance to deal with our rights, without any watered-down content, we will push ahead. We don’t want a resolution which compromises on any rights guaranteed under international law.

Al Jazeera: How will Palestine get past the US veto?

Ashrawi: Any resolution that consists of this will face the veto. There is no avoiding it. But we would rather face a veto than a resolution that relinquishes our rights.

Al Jazeera: Fatah released a statement asking the Palestinian people to boycott Israeli products. This seems to be a shift in their policy towards boycotts. Do you believe that boycotts are effective means of resistance?

Ashrawi: Yes, certainly, I think the Boycotts, Divestment and Sanctions movement (BDS) is a very significant movement. It is the initiative of Palestinian civil society and it has resonated with both Palestinians and internationally.

It gives people of conscience all over the world a chance to participate in holding Israel accountable for its violations of international law. The people can take measures individually and collectively. This approach worked for South Africa.

We know it is more difficult because Israel enjoys complete impunity and bias on the part of some western powers, but it gives opportunity to individuals, who are no longer fooled by falsehoods about Israel and the occupation, to express themselves and call for justice for Palestine.

Al Jazeera: How does ICC membership factor into the Palestinian national project?

Ashrawi: It’s a very important part of the national project. One reason why Israel has been able to persist in its imposition of greater Israel on historic Palestine, its continued [human] rights violations and settlement expansion, and the Judaisation of Jerusalem is because of the impunity it enjoys, and the legal cover granted by the US and others.

It is time that Israel is treated like a country within the law, and not above it. It will provide Palestinians the protection we need, and will hold Israel accountable.

It is a game changer, and Israel, and the US, fear the repercussions that come with Palestine’s membership. It could force Israel to completely change its illegal policies towards the Palestinian people, and cause its allies to reconsider their support.

Al Jazeera: You recently expressed gratitude to the 63 members of the European Parliament for calling on the European Commission to suspend the EU-Israel Association Agreement. Do you think the EU is becoming a better ally for Palestine?

Ashrawi: It’s not a question of alliance. So far the EU is a great ally for Israel. But it is beginning to change its position towards Israel, because of the increased awareness and public opinion throughout Europe. The people’s voice is challenging European governments all across the EU.

They’re beginning to make it known that you can only go so far in denying public opinion by supporting Israel, and denying your own laws concerning human rights. They have to put their money where their mouths are, in terms of legislation.

In terms of the EU-Israel Association Agreement, Israel is in constant violation of the treaty.

The first step was seen in the guidelines of the agreement concerning settlement products [the agreement guarantees free trade between the EU and Israel on many products, but those made in settlements are not considered Israeli and, therefore, not subject to the agreement].

It has opened the whole debate on the issue of how to address Israel’s relationship with the EU, and we applaud the MEPs who called on the EC to end the association agreement.

Al Jazeera: Given the recent developments in Palestine, what is the future of Palestinian efforts to achieve full international recognition? In your opinion, what are the best methods available to the Palestinian people and government?

Ashrawi: This is a very broad question. Let me say that there are turning points and game changers, especially the horrific attack on Gaza, and the joining of international treaties and bodies. We are beginning to change the way the whole thing is addressed.

The whole peace process, supported by the US, has only enhanced Israeli impunity. They have continued with their policies of settlement expansion and attacks on the Palestinian people. They have illegally annexed our capital, East Jerusalem. Israel is persistent in its criminality, and I know that conditions are deteriorating on the ground.

But furthering public initiatives and nonviolent resistance is crucial. We have to be able to work to maintain Palestinian spirits and keep our people on the land, in the face of continued Israeli settlement expansion, which is also in violation of international law.

We must pursue our strategic goals with responsibility. Goals like developing closer relationships with members of the international community, accessing international treaties and bodies; not only the ICC but many others.

This is the way forward for the Palestinian people and their government. 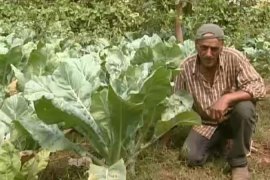 Report paints desperate picture of Palestinians forced from their land in occupied West Bank and denied right to work. 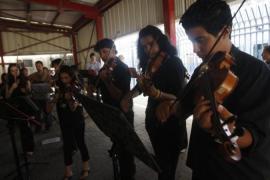 Over the Wall to play Beethoven in Jerusalem

The Ramallah Orchestra’s journey through – and over – Israeli barriers to star in the Holy City. 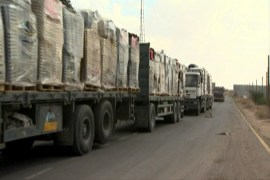