The Electoral Commission of Zambia reported on Saturday night that Patriotic Front candidate Lungu defeated his closest rival, Hakainde Hichilema, in the contest to succeed Michael Sata, who died in office in October aged 77.

Hichilema, leader of the opposition United Party for National Development, finished with 46.67 percent.

Hichilema, one of Zambia’s wealthiest businessmen, pre-empted the announcement of the result earlier on Saturday when he accused the commission of manipulating the results in favour of Lungu – the defence and justice minister in the southern African state.

“The stolen election does not reflect the will of the people of Zambia,” Hichilema said. “If Edgar Lungu is sworn in, he should know that he is an illegitimate president.”

Jen Psaki, a spokesperson for the US department of state, congratulated the country for conducting another democratic election and expressed hope that any issues would be resolved in a democratic way.

“We look forward to continuing to strengthen our relationship with the Government of the Republic of Zambia and its newly elected president, Edgar Lungu,” Psaki said in a statement published on Sunday.

Turnout for the election was around 32 percent as heavy rains disrupted voting across much of the landlocked country. Observers said the ballot was conducted in a fair manner, the Reuters news agency reported.

With another election scheduled for late next year when Sata’s term had been due to end, the winner will have little time to turn around a stuttering economy in one of Africa’s most promising frontier markets.

Lungu, a former lawyer with a laid-back, populist style, used his campaign to tap into the grassroots support of his predecessor Sata, promising voters cheaper food and fuel. 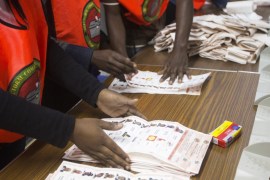 With more than half of the ballots counted, Edgar Lungu of the Patriotic Front party leads with 50.75 percent of vote. 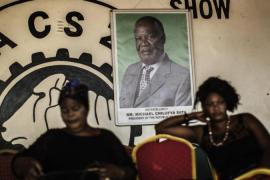 Funeral procession under way in Lusaka as Zambians pay final respects to president who died in late October.