Shooting has been heard amid a police crackdown on a new student demonstration at Kinshasa’s university, AFP news agency says, following two days of bloody violence in the capital of the Democratic Republic of Congo.

At least 42 people have been killed in the violence, according to the International Federation of Human Rights, but these figures are disputed by the government. The authorities on Wednesday put the death toll at five.

Protesters oppose a draft law that would enable President Joseph Kabila to extend his stay in power beyond his current mandate which ends in 2016.

Two shots rang out as dozens of students shouting “Kabila get out!” faced off against a small group of police officers.

In the Ndjili neighbourhood, youths destroyed a police vehicle.

“This morning we’re working all out again because there is a students’ protest” at the university, police spokesman Israel Mutumbo said.

“We are in the process of checking across the city because there are little groups [of possible demonstrators] forming.”

On Tuesday, hundreds of youths torched a town hall in Ngaba, a southern neighbourhood of Kinshasa, while several prisoners escaped from a neighbouring building.

Looters also made off with police guns stored at the site.

The army and police arrested at least 20 people as protesters hurled rocks at state buildings, public buses and even passing cars.

Soldiers fired in the air to scare off looters who targeted a Chinese-owned store.

Tshisekedi, 82, who is recovering from illness in Belgium, has been in opposition since the 1960s, previously taking on the dictator Mobutu Sese Seko as well as Kabila’s father Laurent-Desire Kabila. 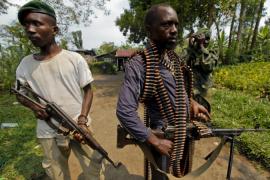 Is disarmament of DRC rebel group a ruse?

The disarmament of FDLR rebels in DRC is seen as a significant step but some critics question the sincerity of the move. 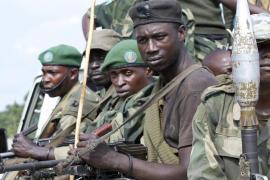 The little-known ADF rebel group is accused of escalating attacks and of kidnapping hundreds of women for sex slavery. 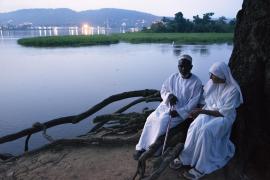 In Pictures: Learning to forgive in DRC