Police in France have identified and released the photographs of two brothers suspected to be involved in the attack on the offices of satirical newspaper Charlie Hebdo, that left 12 people, including four cartoonists and two police officers, dead.

The two brothers have been identified as 32-year-old Said Kouachi and 34-year-old Cherif Kouachi. The two men, along with another person, believed to be a teenager, carried out Wednesday’s attack in the heart of Paris before escaping in a car.

The getaway car was later found abandoned in northern Paris from where the hooded gunmen hijacked a Renault Clio.

The identification of the suspects came amid reports that a police operation was under way in the northeastern city of Reims.

Interior Minister Bernard Cazeneuve said on Thursday that seven people had been detained in the hunt for the two suspects.

In another incident on Thursday, Paris police said an officer has been shot on the city’s southern edge. A French security official said it was too early to drawn an connection with Wednesday’s shooting.

On Wednesday, gunmen burst into the offices of the Charlie Hebdo magazine, killing some of France’s most outspoken journalists and two policemen, before jumping into a car and escaping.

They are still on the run, and authorities have warned they are “armed and
dangerous”.

On Thursday, French Prime Minister Manuel Valls said the two men were known to intelligence services and the fear that they could carry out another attack “is our main concern”. Valls told the RTL radio there had been several
detentions overnight during the manhunt.

Charlie Hebdo’s depictions of Islam, including the Prophet Muhammad, had drawn condemnation and threats before. It was firebombed in 2011 – although it also satirised other religions and political figures.

The attack triggered global outrage and condemnation. French President Francois Hollande said it was a terrorist act “of exceptional barbarism”, adding that other attacks have been thwarted in France in recent weeks. Fears have been running high in France and elsewhere in Europe that fighters returning from conflicts in Syria and Iraq will stage attacks at home.

In a sombre address to the nation on Wednesday night, Hollande pledged to hunt down the killers, and pleaded with his compatriots to come together in a time of insecurity and suspicion.

The security alert in the country was raised to the highest level and protective measures at houses of worship, stores and media offices immediately reinforced. Schools across the French capital also closed, but that did not deter thousands of people from coming out and packing the Republique Square near the site of the shooting to honour the victims.

Those gathered waved pens and papers reading “Je suis Charlie” (I am Charlie).

Similar rallies were held in London’s Trafalgar Square as well as Madrid, Berlin and Brussels.

There was no immediate claim of responsibility for the attack, which the Paris prosecutor said also wounded 11 people, four of them seriously.

Supporters of the Islamic State of Iraq and the Levant (ISIL) praised the attack.

The lawyer of the magazine confirmed that four cartoonists working with the publication, including the editor Stephane Charbonnier, known as “Charb”, were among the dead.

The other cartoonists killed were known as Cabu, Tignous and Wolinski.

According to witnesses, one was a driver and the other two were attackers in terms of their role in the incident, police said.

In an amateur camera footage shared on the internet, the attackers are heard shouting: “We have avenged the Prophet Muhammad.”

“Some journalists took refuge on the roof,” Rowland said.

“Charlie Hebdo has pushed boundaries in the past, and continues to challenge the idea of censorship.”

France’s Muslim leadership also sharply condemned the shooting as a “barbaric” attack and an assault on press freedom and democracy.

“This extremely grave barbaric action is also an attack against democracy and the freedom of the press,” the French Muslim Council (CFCM) said in a statement.

The body represents France’s Muslim community, which is Europe’s biggest and estimated to number between 3.5 million and 5 million people.

Hollande held a cabinet meeting at the Elysee Palace over the incident on Wednesday.

US President Barack Obama’s spokesman said the US “condemns [the attack] in the strongest terms”.

In a 2012 interview, Charlie Hebdo editor Stephane Charbonnier told Al Jazeera why the magazine is a target. 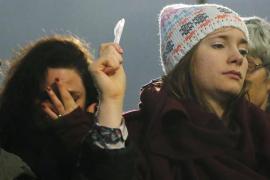 In Pictures: I am Charlie

People across Europe hold vigils for those killed in the attack on satirical newspaper Charlie Hebdo. 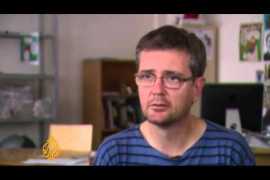