US prosecutors have charged two men with conspiring to overthrow the government of Gambia, in the latest fallout from last week’s failed coup attempt in the small West African nation.

Papa Faal, a US-Gambian dual national, and Cherno Njie, a US resident, were arrested in the US after they returned from Gambia, where they had travelled to help launch a December 30 coup attempt against President Yahya Jammeh’s government, according to the US Justice Department, which released the criminal complaint against the two men.

Faal, 46, was expected to make an initial appearance in court on Monday in Minneapolis, Minnesota, while Njie, 57, was to appear the same day in the US District Court in Baltimore, Maryland.

“These defendants stand accused of conspiring to carry out the violent overthrow of a foreign government, in violation of US law,” Eric Holder, US attorney general, said in a statement.

Last month’s attack on the presidential palace in Banjul was repulsed by Gambian security forces, and at least three suspected attackers died during the fighting, according to unconfirmed reports.

On January 1, President Yahya Jammeh, who has ruled Gambia with an iron fist for 20 years, blamed unidentified foreign dissidents and “terrorists” for the assault.

According to the criminal complaint, an FBI agent interviewed Faal, who described his own participation “as a member of a group of fighters responsible for the attempted coup”.

Faal also identified Njie as one of the coup’s leaders and main financiers, and told the FBI agent that “Njie was also planning to serve as the interim leader of The Gambia upon the successful completion of the coup”.

The men are charged with conspiracy to violate the Neutrality Act, which prohibits US citizens or residents from taking up arms or plotting against a nation at peace with the US, and conspiracy to possess a firearm in furtherance of a crime of violence. 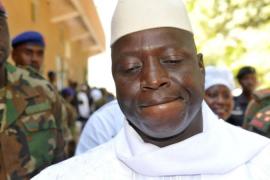 The West African state’s autocratic president has elevated his coup d’etat over his country’s independence. 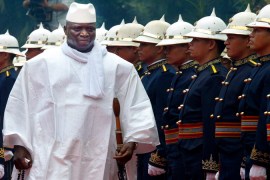 What next for Gambian President Jammeh?

Yahya Jammeh has been reelected as president of the West African nation – now, will he try to become king?