A cargo vessel carrying hundreds of migrants has arrived in Italy after it was abandoned by smugglers and left drifting without a crew in the second such case in just a few days.

Italian Coast Guard Commander Filippo Marini said on Friday that after several hours of struggling in rough seas, rescue teams managed to secure the Ezadeen for towing towards the southern Calabrian region.

An Icelandic ship, part of a new European patrol force to aid migrants at sea, was doing the tow.

Children and pregnant women were among an estimated 450 migrants on board, most of who were believed to be Syrian, said Marini. The Sierra-Leone-flagged cargo ship apparently set sail from Turkey, he said.

Al Jazeera’s Laurence Lee, reporting from Corigliano in southern Italy, said the boat was designed to carry livestock and not humans.

The commander of the Italian coast guard told Al Jazeera that he believed the crew had deliberately disabled the ship before abandoning it, in the knowledge the Italian navy would perform a rescue.

“They are now digesting the assumption that this is the new strategy by the traffickers”, our correspondent said.

One of the people on board the Ezadeen was able to operate the ship’s radio and informed the coastguard late on Thursday that the crew had jumped ship.

The Italian air force sent a helicopter to lower rescuers on to the vessel as bad weather conditions made it impossible to board the ship other than from the air.

The latest high-seas drama came two days after Italian sailors intercepted a freighter carrying more than 700 mostly Syrian migrants which had been heading for the rocks of Italy’s southeastern shore on autopilot.

The vessel had been abandoned by the people smugglers who had navigated it from Turkey via Greek waters.

In that incident, the Moldovan-registered Blue Sky M cargo ship got to within 8km, or 45 minutes sailing time, of a disaster before six navy officers were lowered on to the ship by helicopter and succeeded in bringing it under control.

Those on board included 60 children and two pregnant women, one of whom gave birth on board as the boat steamed towards catastrophe, according to the Italian Red Cross.

Many of the migrants on the ship were treated for hypothermia and broken limbs.

Italy has had to deal with a massive surge in migrants – many of them from the Middle East and the Horn of Africa – hoping to reach Europe by boat.

More than 170,000 people have been rescued in the last 14 months but an estimated 3,000 have perished trying to make the crossing. 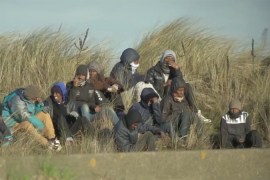 More than 2,300 mostly African refugees seek to smuggle themselves to Britain in search of better life. 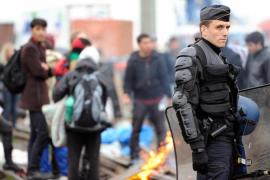