Gambia’s president has blamed unidentified foreign dissidents and “terrorists” for an assault on his presidential palace and insists the army remains loyal.

Yahya Jammeh’s remarks came two days after an apparent coup attempt by a group of soldiers while he was abroad was foiled.

“It is an attack by dissidents based in the US, Germany and UK,” Jammeh said in a televised address on Thursday.

“This was not a coup. This was an attack by a terrorist group backed by some powers that I would not name.”

Dozens of military personnel and civilians have been arrested and a cache of explosives and weapons found, AFP news agency quoted a source in the investigation as saying.

“Several dozen military personnel and civilians have already been arrested and interrogated”, the source said by phone from Gambia.

Quoting military sources, AFP also said that three coup plotters, including the alleged ring-leader, were killed in the capital Banjul on Tuesday.

“They wanted to overthrow the regime,” a military source said.

The pre-dawn assault caused panic in Banjul, while national radio went off air for several hours and state television was suspended.

The West African country is a former British colony surrounded by Senegal on both its northern and southern borders. 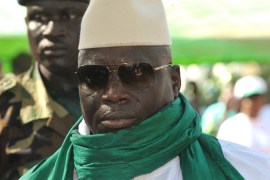 President Yahya Jammeh arrives in Gambian capital after a failed coup on his presidency, prompting fears of a purge.